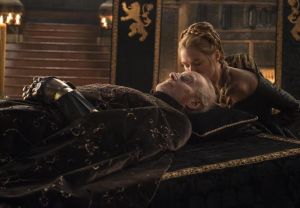 If you think your wait for Game of Thrones‘ fifth season was interminable, just think about poor Tyrion’s plight.

The youngest Lannister sibling found out his former lover was shtupping his dad, then killed her with his bare hands. Then he offed his dad while the older man was in the privy. Then, he snuck out of town the only way possible: by packing himself into a wooden crate and viewing the world (and doing other things we need not talk about now) through a tiny hole for the duration of an ocean voyage.

Makes your months obsessively re-watching the series on HBO Go seem a little more tolerable, no? (At least you could stretch out on the couch.)

By the end of the series’ satisfying return, Tyrion finds himself about to forge a path even more intriguing and challenging than trying to stay one step ahead of his cunning sister: helping a contender for the Iron Throne ascend to the shiny seat.

Read on for the highlights of “The Wars to Come.”

HOUSE LANNISTER: FAREWELL, FATHER EDITION | We start with a series first — a flashback — that shows little Cersei and a friend visiting a fortune-telling witch in the woods. The seer is a little creepy, but even back in the day, Cersei walks around like her gold don’t clank. She demands her fortune and, after the witch cuts her and takes a lick of her blood, she gets it: She won’t wed the prince to whom she’s promised; she will be queen until a “younger, more beautiful” queen casts her down; and though the king will have 20 children, Cersei will have three.

In the present, the queen regent arrives at her father’s funeral, where she blames Jamie for Tywin’s death, watches Margaery like a vindictive hawk and laughs off her cousin Lancel’s efforts to convert her to the religious group of which he’s now a part. Lancel, with short hair and plain clothes, is a “sparrow” who has “found peace in the light of the seven,” he tells her, and he’s been doing a lot of thinking about the role he played in Cersei’s relationship with Robert Baratheon, particularly where it comes to “his boar hunt, his wine,” the young man says. If I were Joffrey’s mama, I’d be worried about a former accomplice looking to cleanse his soul of misdeeds in which I was involved. But the Blonde One is more concerned about where she can get another goblet of Dornish red.

Later, Ser Loras is about to engage in some naked swordplay with a dude named Oliver when Margaery walks right into the bedroom and summons her brother to dinner. “You’re very respectful,” he says wryly, making little effort to cover himself. “I’m very hungry,” she replies. (Siblings on this show, am I right?) They bemusedly discuss whether Tywin’s death means his engagement to Cersei is off, and Loras forecasts a future in which his sister is stuck in King’s Landing with her monster-in-law. “Perhaps,” she says absentmindedly, her brain definitely elsewhere. Ooh, Marg, what have you got planned?

HOUSE LANNISTER: BOXY-BUT-GOOD EDITION | The Lannister brother we haven’t yet heard from rolls out of a box — the same one we saw loaded onto a ship in last season’s finale — and looks… like he’s been living in a crate for quite some time. Tyrion wastes no time getting back to his favorite activities — drinking too much and being pessimistic about the future — but Varys has a plan for his murdering friend. “I believe men of talent have a part to play in the Bobby Kennedy, if you will, for the next ascendant to the Iron Throne. “Good luck finding him,” Tyrion says. “Who said anything about him?” the Spider shoots back.

Yep, Varys wants to take Tyrion to Meereen to meet Daenerys and see if it’s all worth fighting for. And Tyrion, despite his grumbling, seems intrigued.

HOUSE TARGARYEN | Meanwhile, in Meereen, Dany’s Unsullied are being targeted by the Sons of the Harpy, a resistance group that wear creepy gold masks and have escalated their protests to include murder. (A strapping Unsullied who just wanted to be spooned by a prostitute is their first victim.) Daenerys’ response? Tick ’em off even more. “Angry snakes lash out,” she says regally. “It makes chopping off their heads even easier.” (Man, I’ve missed her.) She’s also irked to hear, once Daario returns from Yunkai, that the freed slaves there want their fighting pits back.

Later on, after they’ve made the dragon with two backs, she continues to rail against the pits, but Daario disagrees. He’s naked and mixing her a drink and under those circumstances, yeah, I’d probably hear him out, too. He learned to fight in pits like those in Yunkai; the training made him the man he is today. “Everyone’s too afraid of you to speak the truth. Everyone but me,” he says. (Somewhere, Ser Jorah cries “Khaleeeeeesi!” and wipes a tear from his eye.) Daario also suggests that she use her dragons to their full, terrifying potential. She drops the queen act and, for once, seems like the young girl she actually is when she admits she can’t control the scaly scamps anymore — a fact backed up by her terrifying visit to Rhaegal and Viserion, who try to flambé her.

RELATED Exclusive: It’s Official — The Leftovers Will Mess With Texas in Season 2

THE FREE FOLK/ THE MEN OF THE WALL | Stannis summons Jon Snow to the top of the wall, which means he has to endure a ride up with Melisandre. “Are you a virgin?” she asks abruptly. “No,” he replies. “Good,” she says. (And you thought your daily elevator ride up to the office was awkward.) At the top, Jon is introduced as “The Bastard of Winterfell.” C’mon guys, HE’S DONE OTHER STUFF, TOO. Stannis wants to retake Winterfell from Roose Bolton, but he needs the wildlings to help him. And they’ll never do that unless Mance Rayder pledges his loyalty to Stannis. “Convince him to bend the knee,” Snow is told, “or he burns.”

But even the knowledge that he’ll be turned into a human s’more won’t change Mance’s mind. After some gracious last words to Stannis, the King Beyond the Wall is lashed to a post while the blaze is lit at his feet. The people who are terrible  —Stannis, Melisandre (sporting a duckface of estasy) — watch, rapt. The people we like — Gilly, Stannis’ daughter Shireen, Jon — turn away. In fact, Snow climbs away from the crowd and lobs an arrow directly into Mance’s chest, giving the leader the gift of a quick and (in comparison) far less painful death.

ELSEWHERE IN THE SEVEN KINGDOMS | DarkSansa and Littlefinger stash unfortunate little Robin with a guy who’s going to try to teach him to fight (good luck with that, m’lord) before running off “to a land so far from here,” Littlefinger says, “even Cersei Lannister can’t get her hands on you.” Their carriage drives by Brienne and Pod, the former of which is very despondent about her mission now that Arya has chosen not to be saved. She snaps at Pod, but he seems disinclined to stop being a squire just because the sad lady knight says she’s not a real soldier.

What did you think of the episode? Grade the premiere via the poll below, then hit the comments to elaborate on your thoughts!