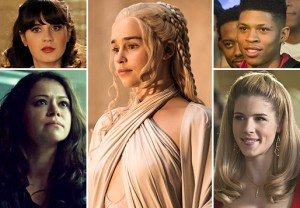 Question: Arrow‘s Oliver and Felicity got a little flirt going last week… I’m so glad to finally see them interacting again. Can you tease anything about their future scenes together?  —Jewel
Ausiello: We asked Stephen Amell to ID his favorite moment from this Wednesday’s wedded hour, and he offered this: “I have a great scene with Emily [Bett Rickards] in the latter part of that episode where we’re really at odds with one another,” he previews. “I thought it was one of our more interesting Arrowcave scenes.” Could it have something to do with the discovery that her new beau is super-suiting up? “Oliver’s fine with Ray and Felicity, until Oliver discovers that he’s the Atom,” Amell says. “Because the whole reason that he can’t be with Felicity is because he has this other thing that he has to do. So if it’s just Ray Palmer, ‘Good, great. Enjoy.’ But if it’s Palmer as the Atom, then Oliver’s going to have a problem.” As for Rickards’ favorite moment — don’t shoot the messenger, Olicity ‘shippers — she tells us it’s when Felicity “walks in with Ray” at the start of the ceremony.

Question: Is there a significance to the different colors of The Flash‘s “speed streak”? It seems it is yellow when he is not suited up and red when he is. The opposite seems true for Reverse Flash. Does this mean something? —BG
Ausiello: That question is above my pay grade. Or below it. Either way, I have no earthly idea. I can tell you that the mystery of who feeds the metahumans will be addressed, as will the more complex issue of whether it’s ethically copacetic for Flash’s foes to be locked up in S.T.A.R. Labs to begin with. “There’s a long discussion [in Episode 22] about the moral implications of the pipeline and what keeping them there means. Do they have that right?,” executive producer Andrew Kreisberg previews. “All the characters get to chime in on how they feel about it. That’s exciting because — beyond everybody always asking how do they go to the bathroom and where do they get their food from — some of them are super dangerous. So, how do you let them out into the world?”

Question: As we’re moving quickly toward May, do you have any scoop on where NCIS is headed for their Season 12 finale? Are we getting a cliffhanger this year?  –Joni
Ausiello: Sort of…? Coming off of last spring’s decidedly quiet finale, showrunner Gary Glasberg told Matt Mitovich that while Season 12 will end with “not your typical cliffhanger,” viewers can for certain expect “shocking surprises that will leave everyone speechless.”

Question: Daenerys-related Game of Thrones intel, please. — Randee
Ausiello: In the new season’s second episode, one of the Mother of Dragons’ advisors will tempt her. Kim Roots would be very happy if that advisor were Daario — played by Michiel Huisman — and if said tempting took place while he wasn’t wearing a shirt. Or pants. (Dear Universe: Please give Kim what she wants. She really, really needs this.) On a more serious note, those two crazy kids, as you are well aware, already connected carnally; if Daario is the consigliere, we’re betting he’s appealing to Dany’s quest to take the Iron Throne.

Question: Is Zooey Deschanel going to miss any episodes due to her pregnancy? It would be weird to have New Girl without the new girl. —Tarik
Ausiello: She may need to skip a few episodes next season, but the show’s writers have come up a really funny/clever way to both explain Jess’ disappearance and ensure that she has a presence in every episode. And it’s not CGI. Nor is it a puppet.

Question: Do you have any juicy Bones scoop to share with us in this cold March day? —Rachel
Ausiello: The loose end concerning Hodgins’ lost fortune will be revisited and possibly tied up during the second half of 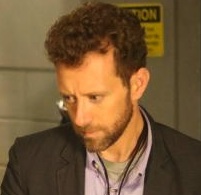 Season 10 (which kicks off this Thursday at 8/7c). “This absolutely is something we’ll be dealing with,” executive producer Stephen Nathan confirms, before hinting that Angela’s onetime richer half may not need the cash after all. “Hodgins will come into some money of his own making, and it will change their lives.”

Question: I would love some scoop about Orphan Black. What will the new season bring? —Jack
Ausiello: It’ll bring a moment in the opening seconds of the April 18 premiere that will feel too good to be true. You can also expect an onslaught of creepy Castor clones; more than one heartbreaking falling out; a scene-stealing turn from a scorpion; and a surprising new business venture for Alison and Donnie.

Question: What is going to be the future for The 100’s Clarke and Bellamy. Will fans have to wait another season for at least a kiss?! — Liza
Ausiello: Let’s back up a little, Liza. Before we start talking about what Clarke and Bellamy’s future will be like, let’s ask ourselves this: Will they even have a future? When prodded about Clarke’s parting words to Bellamy (“May we meet again”), executive producer Jason Rothenberg has only this to say: “I hope they do meet again.” Don’t forget, it’s a big, post-apocalyptic world out there.

Question: I’m still reeling from the Empire finale — and the fact that Rhonda killed Vernon. Any scoop to tide me over ’til Season 2? —Ryan
Ausiello: According to showrunner Ilene Chaiken, the decision to bump off Malik Yoba’s alter-ego “wasn’t calculated” or cooked up early in the season — nor did anyone in the writers’ room say, “Wouldn’t it be cool if it was the white woman” whodunnit. “Once our story took us there, though, we certainly felt like this was a great and interesting opportunity. And 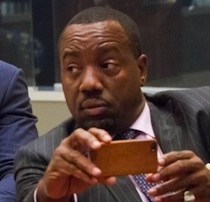 whatever happens, whether Rhonda and Andre get discovered or not, there are going to be some thematic repercussions of that action,” Chaiken adds. In any event, it’s good news for fans of the twisted-but-dedicated couple, who appeared to be on the verge of a Jennifer Hudson-related split heading into the finale. “We love that Andre-Rhonda dynamic, and whether they’re coming back together in the way they were before, or whether they have to renegotiate their relationship, is really interesting to us. We also have to look at whether or not Andre’s [religious] conversion, if that’s indeed what it is, plays into it,” Chaiken teases. “But we definitely love the both of them, and we love them together.”

Question: Have we seen the last of Naomi Campbell on Empire? Camilla’s scenes with Cookie were pure gold! —Greg
Ausiello: Oh, Greg, we couldn’t agree more. That’s why we put that exact question to Chaiken — especially since, with Lucious in jail, Campbell’s Camilla has no reason not to rekindle her romance with his son Hakeem. “Did you just jump into my brain?” the showrunner asks with a chuckle. “It’s certainly a possibility — and a very alluring one.” In other words, we might get to see Yoko playing that tambourine after all!

Question: How long is Grimm going to keep Adalind’s pregnancy a secret from Nick and his friends? —Erin
Ausiello: Nick and the gang will find out about the upcoming blessed cursed event in Episode 19, which is slated to air in April.

Question: Is Abigail dead on Forever? I can’t seem to find a straight answer anywhere. —Sheri
Ausiello: The fate of Henry’s beloved — yet absent — wife will come up in next week’s episode, and will continue to be revealed as the season draws to a close, series creator Matt Miller tells TVLine. A bonus piece of information that probably will only confuse you more: Henry’s assistant, Lucas, becomes heavily involved in that storyline. 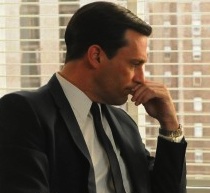 Question: The final episodes of Mad Men are almost here! Do you know if we’ll see Caity Lotz’s character Stephanie again? —Catarina
Ausiello: Don is handsome, Peggy shows up for work wearing shoes again, Roger’s a funny guy, advertising stuff may or may not happen… I better stop there before I get in trouble! (Probably a good time to mention that this week’s AA was guest-edited by Matthew Weiner.)

Question: I’ll take some scoop on Justified. What can you give me? —Matt
Ausiello: A heart attack in the final moments of this week’s episode.

This AAnd That…
♦ I keep waiting for the quality of Last Man on Earth to dip, but it’s not happening. If anything, the episodes are improving. And for not being a comedienne, January Jones is holding her own opposite Professional Hilarious People Will Forte and Kristen Schall. Also, the show’s writers have discovered what I’ve known since I was 4: diarrhea jokes are always funny.
♦ All 13 episodes of Bloodline are in my rearview mirror and, aside from a few unfortunate narrative turns in the final two hours, I was thoroughly engrossed by Netflix’s slow-burn family thriller. The cast did not disappoint, particularly Ben Mendelsohn, who should see a nice career bump (not to mention some awards-season love).
♦ The “AAnd” above is not a typo, but a sly wink to the title of this column, hence the italicization of “AA.”

♦ Yes, I’ve heard the rumor about a Grey’s Anatomy doctor dying during May sweeps. No, I have no idea if it’s true.
♦ Still can’t decide what I’m more excited about: The big X-Files news or my cameo in Gillian Anderson’s Twitter feed.
♦ I just realized what Archie Panjabi’s first post-Good Wife project should be: a role in American Horror Story: Hotel. Get on that, Ryan Murphy.