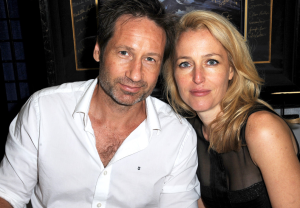 The truth is  right here: The X-Files is indeed returning to Fox, with original stars David Duchovny and Gillian Anderson reprising their respective roles as Fox Mulder and Dana Scully.

Fox has officially ordered a six-episode continuation of its phenomenally successful supernatural drama, to shoot this summer and (presumably) air at some point next season. (An official airdate remains TBD.)

“I think of it as a 13-year commercial break,” said X-Files creator Chris Carter, who will oversee the new episodes. “The good news is the world has only gotten that much stranger, a perfect time to tell these six stories.”

The X-Files ended its nine-season run on Fox in May 2002, but the franchise was resurrected on the big screen in 2008’s The X-Files: I Want to Believe, a follow-up to 1998’s The X-Files: Fight the Future. When last we saw Mulder and Scully in Believe, they were grudgingly helping the FBI find some missing women/bust up a bizarre, Frankenstein-like operation in Virginia. Also important to know: The bureau had pardoned Mulder for going on the lam (at the end of the series’ run), Scully had returned to her medical career, and the partners were still romantically entangled and living together.

Duchovny will next be seen in NBC’s Charles Manson-themed drama Aquarius, while Anderson has Season 3 of Hannibal on deck. Coincidentally, the two shows will air back-to-back on Thursdays this summer. News of the X-humation comes roughly a year after Fox jump-started another one of its marquee franchises, 24, with a limited-series order. Although Live Another Day didn’t make much noise in the ratings, it was well-received by critics and fans alike.

PHOTOS The X-Files: 16 Things We Need to See in Fox’s Revival

“We had the privilege of working with Chris on all nine seasons of The X-Files — one of the most rewarding creative experiences of our careers — and we couldn’t be more excited to explore that incredible world with him again,” said Fox chairmen Gary Newman and Dana Walden in a statement. “The X-Files was not only a seminal show for both the studio and the network, it was a worldwide phenomenon that shaped pop culture — yet remained a true gem for the legions of fans who embraced it from the beginning. Few shows on television have drawn such dedicated fans, and we’re ecstatic to give them the next thrilling chapter of Mulder and Scully they’ve been waiting for.”

What say you, X-Philes? Excited? Scared? Skeptical? Hit the comments!