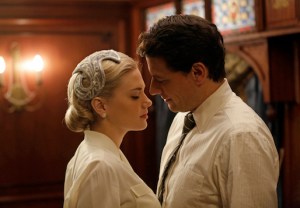 Warning: This post contains spoilers for Tuesday’s episode of Forever.

Abigail Morgan, this is all your fault.

As we learned during Tuesday’s Forever, Henry’s second wife is possibly still alive (despite her long absence) and definitely the reason he’s moped through the past few decades.

“Since the time that she left him that letter until present day, Henry has never seen or heard from her,” series creator Matt Miller tells TVLine. “That doesn’t make any sense for him. In addition to being in love with her, that’s one of the reasons he’s never put a move on, because he doesn’t have closure.”

Fans will recall that an episode earlier this season introduced Abigail’s mounting anxiety as she grew older, but her immortal husband stayed perpetually in his 30s. Flashbacks during Tuesday’s hour chronicled Henry’s slide into depression following her departure — and showed how Abe, in his mid-30s at the time (and played by Judd Hirsch’s Numb3rs co-star David Krumholtz) helped his adoptive father “out of the gutter and the abyss,” Miller notes.

But this week’s episode is just the first piece of a mythology arc that Miller promises will enable Henry, “by season’s end, to find out what actually happened to Abigail.”

In next week’s installment, Miller previews, Abe gets a lead on his missing mother, but “He’s afraid to tell Henry about it, because he doesn’t want Henry to sink into one of these manic fits of despair, so he decides to do a little recon on his own.” And who better to help the antiques-shop owner with his quest than a cyber-minded medical examiner’s assitant with a demonstrated history of too much free time?

“Lucas and Abe,” Miller says, laughing. “We haven’t really done a story with the two of them throughout the season. It’s really fun to see those two actors, Joel David Moore and Judd Hirsch, together.”

Speaking of working closely together, we’re just going to leave this parting Miller quote here, and the ‘Mortinez’ ‘shippers can make of it what they will: At he end of next week’s episode, the EP says, Abe gets “very, very close” to figuring out Abigail’s fate — “at the same time that Jo and Henry are getting very close to one another.”