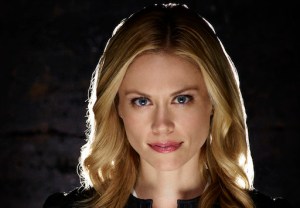 And here we thought Grimm‘s first hybrid baby was going to be a Blutbau or a Fuchsbad or something of that ilk.

If you’ve been paying attention, you know that the only person the cunning Ms. Schade bedded lately was Nick — and that was 1) while she was in the guise of his longtime love, Juliette, and 2) as part of an effort to strip him of his Grimm (read: monster-fighter) powers.

“Yes, Nick is the father,” Coffee says, laughing. “It is insane. And now that Juliette is a Hexenbiest and they’re really pushing her character into such a dark place — and Bitsie [Tulloch] is doing such a great job working with all of that new, evil energy —  they’re using this as a way to push that even further.”

The result, she tells TVLine, is that the character landscape “has changed completely by the end of the season. It’s like, ‘Well, who’s good? Who’s bad? Who are you rooting for anymore?'”

Let’s not forget that Adalind’s first child, Diana, is missing in action, and there’ll be a lot of ‘splainin’ to do when Capt. Renard, Diana’s dad, finds out Ade’s Hexuality has backfired in a major way.

Read on as Coffee gives us the lowdown on Adalind’s second visit from the supernatural stork.

TVLINE | Was Adalind being pregnant again your idea, once you found out you were expecting?
No. Definitely not my idea… When [series creators] Jim [Kouf] and David [Greenwalt] told me they were writing it in, they said the character probably wouldn’t deliver until the following season, and this was way back before we’d gotten the pickup or anything. I was very surprised first, and then I thought, “Well, the great thing about this is that I will have no pressure to lose the baby weight.”

So that was good news. I was more just sort of like, “How are they going to make this plausible, or how are they going to get the audience on board with this?” But they’ve figured out a way to do it that raises the stakes for everyone. As you’ve seen, things have gotten so bats–t nuts all over the place, and this is just another way of upping the ante for everybody.

TVLINE | At the point that you’re shooting now, which characters know that Adalind is pregnant again?
We’re about to shoot [Episode] 19, and 19 is when everybody finds out… Adalind takes a couple of episodes to kind of like, “Okay. Let’s take a minute to figure out who the father is.” She knows it’s Nick, but publically, I think she’s trying to figure out which father will benefit her the most.

TVLINE | After all she went through — physically and emotionally — with Diana, and still not knowing where she is, I can’t imagine that Adalind will ever be like, “Oh, awesome. I’m doing this again.”
“Awesome” is definitely not her reaction to the baby. She’s still trying to find Diana, so when she finds out about this new pregnancy her first reaction is just, “Oh, no. What do I do with this now?” It’s fairly hard for me, just from an acting perspective, to even try to relate to what kind of emotions she must be going through and what’s motivating her to not just give up and run away to Bermuda and hang out there for the rest of her life, because she’s really got herself in a pickle. But the royal family has kept her guessing for so long, and with the new pregnancy, she will at least find out pretty quickly who has her back, if anyone.

TVLINE | When TVLine visited the set recently, you were shooting with Nico Evers Swindell, who’s playing a new prince. Is he a friend to Adalind? A foe?
It’s a total toss-up right now. They’ve written this character in such an awesome way, and Nico’s really great, but he’s a much more forceful presence, and he seems to be operating for himself. He wants results, and I think he’s definitely not as patient with Adalind’s antics as the rest of [the royals] have been… I think mostly she worries about being murdered. [Laughs] It’s mostly that.

TVLINE | Will Grimm have wrapped by then?
We’ll be wrapped in the middle of April. I kind of plotted it out that way so that it would work with production schedule, but now there are rumors we’re going back in June. So the amount of time off I’ll have, we’ll just see, but luckily I’m on a show with eight regulars.

TVLINE | What can you tease about what you’re shooting right now?
She’s still hell-bent on getting Diana back, and I think she’s hoping that this new child will be a tool that she can use in order to get Diana back.

TVLINE | The Juliette-Adalind blowout a few episodes back was a long time coming. What’s ahead for those two?
Juliette will continue to try to kill Adalind, and Adalind will try to continue to survive.

TVLINE | I loved Adalind’s face after Juliette bests her, like “Wait a minute, this is not the way this was supposed to go.”
Yeah. I think Adalind is sort of catatonic for a lot of these episodes, just like, “The world’s spinning. What the hell do I do now?” There’s a lot of that going on.