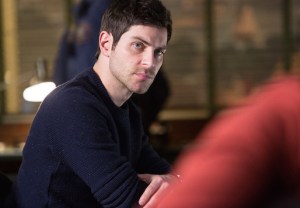 Grimm‘s beauty is officially a (Hexen)biest — and tonight (NBC, 8/7c), her significant other has to figure out how he wants to handle that.

Yep, this week’s episode is the one where Nick, who by birthright and choice is tasked with wiping out the fairytale monsters of the world, reels as he realizes that his longtime girlfriend Juliette has become one of the uglies he hunts.

“She knows my history with Hexenbiests,” star David Giuntoli says when TVLine visits the series’ Portland, Ore., set. Plus, her new state of being is “probably affecting her mood and stability a bit. She’s becoming something else. It’s not Juliette really there, entirely, anymore. It’s like there’s a new lobe up in her brain.”

He adds with a laugh, “It’s like I say: Hexenbiest is the worst STD she could catch.”

A quick catch-up, in case you’ve been too busy searching for the seven keys to remember how we got to this point: When Nick was stripped of his Grimm powers, Juliette selflessly volunteered to take part in a spell that required her to become Adalind (kind of) and sleep with him. All seemed to have worked… until an unforeseen side effect transferred some Hexenbiest powers to the otherwise totally normal human Juliette.

And the fact that Juliette went first to Capt. Renard (who’s a Zauberbiest) — and not Nick — with the news is completely understandable, star Bitsie Tulloch says, given that her honey hates Hexenbiests with an ax-swinging passion.

“She doesn’t understand what’s going on, but she knows enough about this world that Hexenbiests are basically the mortal enemies of Grimms,” Tulloch says. “She’s scared that he’s either going to kill her — or she could kill him. She really doesn’t know how to rein in her anger.”

That consideration’s not a minor one, series co-creators James Kouf and David Greenwalt say during a chat in the Spice Shop’s back room. “It is a real possibility,” says Greenwalt, citing that Juliette — a Hexenbiest “who is made, not born” — may be stronger than any baddie Nick has encountered before. (A fact Adalind learned the hard way in the previous episode.)

Nick and Juliette “are a couple that is assailed by forces beyond either one’s control, and sparks are definitely going to fly,” Greenwalt adds.

The very nature of who they now are, Kouf says, is “already kindling for a fire.”