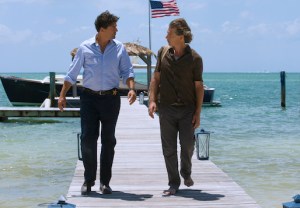 And by the end of the hour, thanks to flash-forwards, we watch one member of the Rayburn brood literally get blown to pieces by another.

In just a moment, we want to hear what you thought of the new 13-episode drama from Damages‘ Todd A Kessler, Daniel Zelman and Glenn Kessler. But first, a quick review of what goes down during the hour.

All of the Rayburns gather at the hotel run by their parents, Sally and Robert (played by Carrie‘s Sissy Spacek and The Right Stuff‘s Sam Shepard — for a weekend celebrating a local pier being named after them.

Though the Rayburns aren’t completely problem-free before Danny shows up, his arrival soon has everyone twanging like piano wire stretched to its limit. Mere hours after he comes home, all four siblings are embroiled in an angry exchange that is ostensibly about seating plans but really about everything that’s happened to and among these four in the past.

But what has happened, exactly? Why is Kevin so quick to dismiss his feckless brother, while Meg takes steps to placate him? And while we’re on the topic of questions posed during the premiere: What does Robert mean when, during his speech at dinner, he vaguely mentions the “trouble” the family had many years before? Who is the guy Meg is banging in her car in the first few moments of the hour? (Because he sure isn’t her boyfriend.) What, if anything, does a body found in the mangroves — the crime investigation being part of John’s official duty — have to do with the Rayburns? And what’s the story behind that seahorse-necklace-wearing woman Danny keeps hallucinating?

Though Danny wants to stay in the Keys after the party weekend is over, pretty much everyone else thinks that’s a bad idea. Danny’s lone supporter is John, who alludes to owing his older brother did for something he did for him way back when. (Again with the vague!)

RELATED Unbreakable Kimmy Schmidt: Is Netflix’s New Comedy as Resilient as Its Heroine?

But after Danny drinks too much, nearly drowns and winds up naked on the pier in front of the hotel, even John knows that his brother has to go. When he tells him as much, though, Danny responds with an ominous, “Things happen to people… and then you’ll need me.”

Still, John drives his brother to the bus and it seems like that’s that — except that we know, thanks to those flash-forwards, that John will find himself carrying his unconscious brother through the mangroves in the pouring rain at some point in the near future.

“I’m gonna tell you everything. It’s not very pleasant, but it’s the truth. What we did to our brother, we had to do. Please don’t judge us,” John’s voiceover tells us as he heaves Danny into a boat, douses him in gasoline and strikes a flare to cause an explosion. “We’re not bad people, but we did a bad thing.”

TVLiners, are you intrigued? Grade the premiere of Bloodline via the poll below, then sound off in the comments!