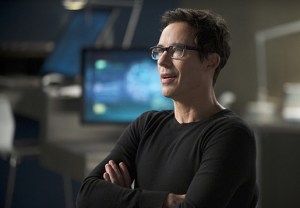 On Tuesday’s season finale-level episode of The Flash, the doc revealed himself as Reverse-Flash to Cisco… before killing the young man! But to Wells — who hails from the distant future, and whose real name is Eobard Thawne — Cisco has been dead for centuries. Having failed to kill Barry 15 years ago, the time-traveler wants to make the him go faster so he can get home.

Speaking of going back and forth, Iris and Barry confessed their feelings for each other, culminating in a kiss, right before he unveiled himself as The Flash to her. Alas, Barry found himself speeding so fast to stop the Weather Wizard that he ran right into the past before any of the major events took place.

“The advantage of having a show that dabbles in time travel [is] this episode allowed us to give people a tease and a taste” of some highly anticipated reveals, executive producer Andrew Kreisberg says.

But will any of the shockers stick? Will Cisco still discover the truth about his mentor? What is Dr. Wells’ top priority? And which guy really has Iris’ heart?

Below, Kriesberg and stars Tom Cavanagh and Candice Patton weigh in on those burning questions and more.

BREAKING THE TIME-SPACE CONTINUUM | Now that Barry has gone back in time, next week’s episode will deal with “how much of [what took place in Episode 15] still happens and how much of it might possibly change,” Kreisberg previews. As Dr. Wells pointed out previously, “there’s different versions of time travel. There’s the fixed loop and then there’s the version where time is more plastic and mutable. One of the fun things is discovering, like on Doctor Who, what’s a fixed point in time and what can’t be changed, what things always have to happen, and then what things are changeable and mutable. It’s a mixture of both.” That could spell bad news for Cisco — or good, if you look at it from the point of view of “Yay! He gets to live!” — because the episode explores “how certain events occur that prevent Cisco from following along the same trajectory” in his suspicions about Dr. Wells. Then there’s this question: Is there now a parallel universe with no Flash? “Is there?” Kreisberg replies coyly. 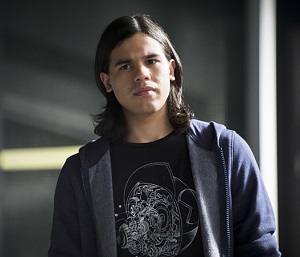 THE TRUTH ABOUT DR. WELLS | As if killing Cisco wasn’t heartbreaking enough, Kreisberg reveals, “We didn’t even script that [Cisco] cries and that notion that Carlos worked out that the minute [Dr. Wells] walks into the room, [Cisco] knows he’s going to die.” But before you start plotting your revenge against the doc, the EP argues, “Eobard Thawne, himself, is not an evil man. He has a reason for doing what he’s doing and he has an agenda. He thinks of himself as the hero. … There’s nothing he said in that scene to Cisco that isn’t the truth. He’s sorry he found out. He’s sorry it has to happen. But it does have to happen. There’s a scene in Episode 16 which mirrors this scene that speaks to that.”

Cavanagh echoes the sentiment, noting that Dr. Wells is “furthering his agenda, but he’s also furthering Barry’s agenda. Those two agendas are simpatico. So as he’s working with them, he is appreciative. All that stuff that you see is not a mustache-twirling, villainous starting point. It’s actually genuine. We’re trying to accomplish something, and for the first season, we’re accomplishing it together, which makes it a little more heartbreaking when the next phase of the plan starts to happen.” As for that master scheme, which originally involved killing Barry, “he thought it was going to be a neat and easy thing and instead he’s found himself trapped here for the last 15 years,” so at this point, he’s more concerned with getting home than offing The Flash, Kreisberg explains.

FAMILY BONDS | Kreisberg confirms that Wells is telling the truth about his connection to distant relative Eddie Thawne. “There’s some great scenes coming between Tom and Rick [Cosnett],” he teases. “That starts to become a storyline,” as glimpsed in this trailer. 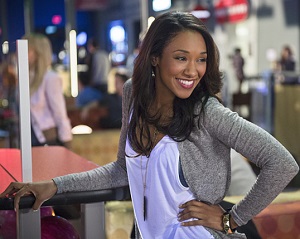 DECLARATIONS OF LOVE | Barry’s trip to the past threatens to undo the progress he and Iris made this week, but no matter how the timeline is changed, “at the root of how she feels is she loves Barry,” Patton affirms. “That also makes it very complicated because she does love Eddie, but it’s just in a different way.” Meanwhile, the newbie reporter’s investigation into Dr. Wells “makes up a large part of Iris’ arc for the rest of the season,” Kreisberg shares.

Flash fans, how do you feel about this week’s big twists? Drop a comment with your thoughts below.