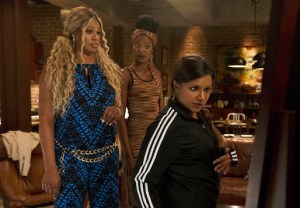 When fashion-fearless Mindy wears nothing but track suits and tries to get out of having her picture taken — as the mama-to-be does for most of this week’s Mindy Project — you know a Lahiri level-five freakout is in the works. Thank goodness for an outspoken aspiring personal stylist, a shiny leopard-print bodysuit and a fat-shaming hoarder, eh?

Don’t worry. We’ll explain as we review what happens in “What to Expect When You’re Expanding.”

CLOSET CASE | Thanks to Little Man Castellano’s increasing size, none of Mindy’s clothes fit. Danny assures her that he thinks she’s radiant. “This isn’t a glow! This is sweat from exertion from trying to pull these jeans over my fat ass!” she cries, and as someone who went through all this nonsense not long ago, PREACH, Min.

Even worse, Mindy’s so self-conscious about her pregnancy weight gain that she doesn’t want to have sex with Danny. This may be the first time this has happened in the history of history.

SHEENA SAVES THE DAY | When even Mindy’s foolproof skinny dress — one that makes her look good, no matter what — splits in two places and flings itself from her body, she gives in to attiring herself like a college freshman with a Friday 8 a.m. class. Enter Tamra’s cousin Sheena (played to the campy hilt by Orange Is the New Black‘s Laverne Cox).

Sheena poses. She proclaims. She does some very funky (and funny) dance moves in front of a mirror. And when she leaves, Mindy’s laid out on the bed looking like Catwoman-by-way-of-Strawberry. When Danny comes home, he does what any sane person would: He laughs. But what he does not remember is that he is dealing with someone who’s highly strung under normal circumstances, and pregnancy hormones could turn even the most centered yogi into a doughnut-demanding lunatic.

“You’re going to get hotter and hotter like George Clooney, and I’m going to get fatter and fatter like Rosemary Clooney,” she wails, and not even Danny’s assurances that he finds the “Mambo Italiano” singer sexy can change Min’s mind.

PHOTOS Quotes of the Week From Mindy Project, Girls, Mom and More

HASTA LA VISTA, HOARDER | Know what does change Mindy’s mind? Getting her bitch on, which happens when she and Morgan storm into Jessica’s place and confront her about dumping the nurse because he’s gained weight. As Mindy passionately defends her co-worker, she realizes that she should direct a little of that indignation at the way she’s been treating herself.

Meanwhile, Sheena and Tamra have found Danny at the hospital, and there is no greater visual you’ll see this week than Sheena caressing Dr. C’s face as she shows him how to make Mindy feel his love. “She’s building a whole baby in there,” Sheena purrs. “Making her feel pretty is your only damn job.” (I loved Chris Messina hastily brushing away a tear after that, too.)

At home, the docs make up, and Danny tells his baby mama that the most beautiful thing about her is her confidence. “Really? Because everyone I’ve ever met says it’s the most annoying thing about me,” she replies, but then can’t say much more because they’re totally going to have sex in the kitchen.

GRIN AND JER IT | Elsewhere, we learn that Peter and Lauren are getting married in Texas — remember when we thought Adam Pally was gone? — and that news throws Jeremy into a fit of wanting a girlfriend. He eventually hooks up with an angry woman who works in finance (How I Met Your Mother‘s Cristin Milioti) and does a rather proud walk of shame back to the practice in time for the group photo. Good for you, Jer.