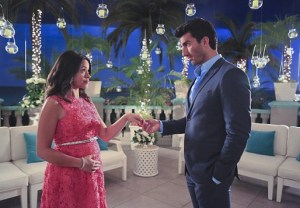 Warning: The following contains spoilers for Monday’s episode of Jane the Virgin.

“If there were ever two people who were just destined to be together, it’s us. Jane, will you marry me?”

Rafael’s incredibly romantic proposal on Monday night’s Jane the Virgin didn’t exactly get him the answer that he wanted.

After only six months of dating, the titular heroine wasn’t sure if she was ready to get hitched to her soon-to-be baby daddy. “I love you, and I want to get to marriage. I’m just not there yet,” she confessed. Ouch.

TVLine chatted with Justin Baldoni to find out how Rafael will deal with the rejection — and the looming presence of Jane’s ex Michael. The actor also talked about cancer flashbacks and becoming a telenovela stud.

TVLINE | I was very impressed by how they handled the proposal. It felt very realistic, and you could see both Jane and Michael’s sides.
That was a whole throwback to The Affair. That’s what’s so awesome about our show. [Executive producer] Jennie [Urman] and [our] writers are so brilliant. They take real situations and find ways to put them into this crazy telenovela fantasy world. You have these real relationship moments where you can see the guy’s side and the girl’s side. You can see how something happened and how something could be misinterpreted — or how both people can actually be right, but yet see things totally differently. Because we don’t all see things the same way. We’re unique for a reason. We each have two different eyes and ears, and we have our own feelings about and projections on what the other person is saying. What could be something very simple for you might be complex for somebody else, even though the intention was the same. I just love how they did that. They didn’t make Rafael seem like he was jumping the gun and then also didn’t make Jane feel like she was just rejecting him.

TVLINE | He says he’s going to be OK, but going forward, is he still a little bit hurt?
Yeah, he is. That’s the beginning of where we’ll see Rafael express and show his vulnerability and pain in different ways. Oftentimes, pain brings up more pain. Rafael’s had a lot of that in his life.

TVLINE | Does it start to drive a wedge between them?
It may. But doesn’t it always when someone’s dealing with [conflict]? Whether it’s him doing it or her doing it or if it’s just the situation, unless it’s dealt with, it can cause issues. That’s life.

RELATED Performer of the Week: Jane the Virgin‘s Jaime Camil

TVLINE | The scene where Rafael says, “Life is short,” and she says, “Life is long,” was so telling. They see things so differently.
Yeah. He’s a little bit older than her. He had cancer. She’s younger. She’s got her whole life ahead of her. They’re looking at the same coin, but seeing two different sides. It’s very telling and it’s very real, which is why I love this show. You can have a real, honest relationship in the middle of something so out there.

TVLINE | Having that health scare, his attitude makes sense. Will we see any flashbacks to when he was sick?
I don’t know. That would be really cool. But no, I haven’t.

TVLINE | It would be interesting to see when that change happened in him.
Yeah. I don’t know what they have planned, but luckily, there’s a second season and who knows? We might. 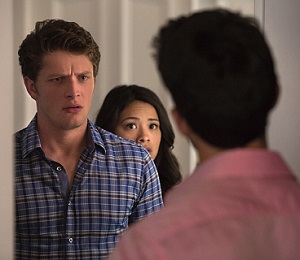 TVLINE | How much is Michael a source of tension for Jane and Rafael?
Very high. But there are so many other things that are existing for Rafael that Michael’s not really on his mind at all. It’s kind of just a nuisance, like a, “Why won’t this guy go away?” kind of feeling, not so much of jealousy or needing to act on something. “Come on, give it up.”

TVLINE | How fun was it to shoot the beach scene where you’re dressed as telenovela characters?
It took longer to shoot because we couldn’t do it with a straight face. [Laughs] As soon as she looked at me, she started laughing. And as soon as I looked at her — I actually didn’t start laughing. She looked super beautiful in that whole getup. But when you’re overacting and you’re trying to say everything with that overdone, raspy voice, it just becomes so fun and funny and hilarious. When you finally do it and you nail the bad acting while you’re acting, it was just a blast.

Jane fans, did our gal make the right decision? Did Rafael’s look of rejection break your heart? Or are you rooting for Michael?