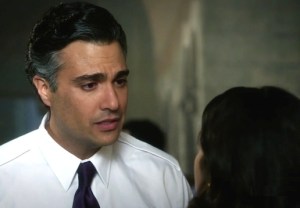 THE PERFORMANCE | Vain, egotistical, absentee – those are all qualities that describe Jane the Virgin‘s father, Rogelio. And yet, we adore him, in big part thanks to the hilarious performance of his portrayer Jaime Camil. Week after week, the actor has brought a sweetness and naivete that keeps his self-absorbed character from becoming unlikable. And his superb comedic timing has us rolling on the floor with gems like this line from Monday’s episode: “You can’t have The Passions of Santos without Santos! Then it’s just Passions, and that show failed!”

But this week, Camil was more than just funny; he brought tears to our eyes in a moving father-daughter moment. Upon learning that his telenovela was planning to kill off his character, Rogelio asked his daughter to write him an epic death scene. She delivered, and he performed it so well, Jane finally called him “Dad,” causing Rogelio to well up and declare, “I have this feeling in my chest now. It feels kind of warm.” So do we.

HONORABLE MENTION | On The

Vampire Diaries, Kat Graham brought the despair and isolation of being trapped in a prison world by herself to life with heartbreaking intensity. Bonnie’s helplessness was no more evident than when she decided to kill herself, recording one last video message for her friends. “It’s just the loneliness. I can’t take it. And I only know one way to turn it off,” she explained, Graham’s face and voice breaking. But even more impressive was the resilience the actress imbued Bonnie with when she chose to “stay strong” and fight for her life. It wasn’t survival of the fittest, but survival of the bravest.

any given episode of How to Get Away With Murder, we’re left speechless by the powerhouses who comprise the regular cast. This week, though, it was Conrad Ricamora who caught our attention in his short but powerful time on screen. As Jack Falahee’s Connor has grappled with the events of Murder Night, his tall tale of drug addiction and the stress of being Annalise Keating’s student, we haven’t paused to consider how Oliver might be dealing. But Ricamora allowed us a brief glimpse at Oliver’s internal struggle, as he planted a passionate kiss on Connor, pulled away just as quickly, then confessed that Connor is like a drug to him. “I more than like you,” he nervously admitted to his ex. With those words, Ricamora transformed his character from nerdy computer whiz into a deeply complex man we can’t wait to know better.