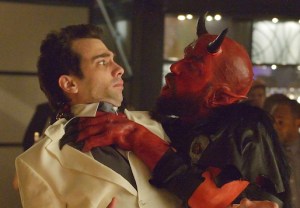 Steel yourself, Josh Greenberg: You’ve got many more romantic battles ahead of you.

The surreal comedy starring Jay Baruchel will be back for 10 new episodes in 2016.

“Simon Rich has delivered an incredibly smart and original take on the search for love,” Nick Grad, president of original programing, FX Networks and FX Productions, said in a statement. “Critics and fans alike have embraced his unique storytelling, [EP] Jon Krisel’s stunning visuals and the brilliant performances of Jay Baruchel, Eric André and the rest of the cast that has made Man Seeking Woman one of the best new comedies on television.”

RELATED The League to End After Season 7

Creator Simon Rich added, via statement, “Working on Man Seeking Woman has been the creative highlight of my life. FXX gave us the freedom to make the show we love and they let us build some truly disgusting monsters. I’m so grateful to [FX Networks CEO] John Landgraf and his team for believing in us and I can’t wait to get back to work.”

Man Seeking Woman premiered in January to 326,000 total viewers and a 0.2 demo rating, retaining less than half of its It’s Always Sunny lead-in. At last count, the off-kilter comedy did 210K and a 0.1.