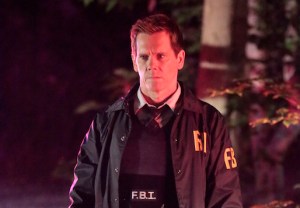 At the end of The Following‘s second season, just as Edgar Allen Poe-obsessed serial killer Joe Carroll was taken back into federal custody, his FBI agent nemesis made one last vow.

“You won’t be seeing me anymore,” Ryan Hardy promised the murderer, whose capture he’d personally supervised (and whose life he’d very nearly taken).

But “anymore” — like nevermore — is a really long time. And though Kevin Bacon‘s Ryan may not actually see James Purefoy‘s Joe as the Fox drama kicks off a third season, Carroll’s influence is as palpable as an ice pick through the eye.

VIDEO The Following Cast, EPs Vow a Return to Basics in Hardy-centric Season 3

“He’s a really big presence, strangely,” Bacon tells TVLine during a visit to the series’ Brooklyn, N.Y., set. “That’s part of the greatness of Joe Carroll — and the greatness of James Purefoy — is that even when he’s not here, he’s here.”

Joe, who you’ll learn is behind bars, is far from Ryan’s only problem as The Following returns (Monday, 9/8c). A year has passed since we last checked in with Hardy & Co.; new killers have entered the fray and old killers have bided their time, waiting for the perfect moment to bring down the beleaguered FBI agent.

In addition, one romance has ended, another has blossomed and at least one character has sprouted a disturbing coping mechanism. Read on for scoop from Bacon, Purefoy, returning castmate Shawn Ashmore and Following newbie Zuleikha Robinson (Lost).

RELATED Matt’s Inside Line: Scoop on The Following and More!

HAPPILY NEVER AFTER | Let’s start on a positive note: When we re-encounter Ryan, he’s happy (no, really!) and in a loving relationship with Robinson’s Gwen, who’s a doctor. When I bring up Ryan’s habit of terrible romantic moves, Bacon chuckles. “I made bad choices. That’s what I do. I make terrible choices again and again, whether it’s with women or whatever. But in the case of Gwen, I think she’s the right girl for me.” It helps that the attractive doc knows that her boyfriend has had an extremely rough couple of years. “She was aware of a few things, because the case has been pretty public,” Robinson says. “She’s not unaware. I know what I’m getting into.” 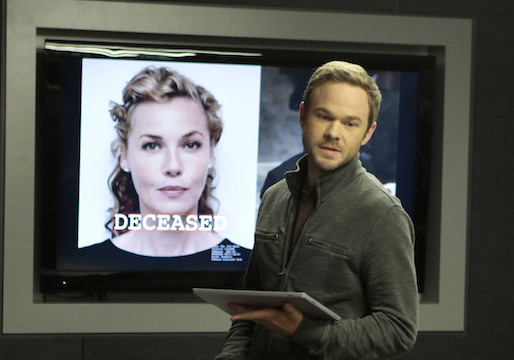 RARING FOR REVENGE | After the death of his mom and his brother, surviving twin Mark will be a major (and majorly messed-up) player this season. (In his grief, look for him to ascend to another level of crazy.) Meanwhile, a hardened and no-longer-with-Max Mike is “driven by wanting to kill Mark Gray,” Ashmore says. However, the young agent isn’t “like a loose cannon all the time,” he continues. “We recognize that he is still very tormented and very raw” — you’ll recall that Mark’s mom killed Mike’s dad on camera last season — “but he can still be in the FBI, because he can still function.” But is Mike’s prey working alone? More on that in a moment.

WHERE’D YOU GO, JOE? | Though a few episodes will pass before Purefoy appears on screen, Bacon promises that Ryan and Joe will interact in a way that fans will find pleasing. “He picks up s—t from me that I cannot [explain]… He’s in solitary, lockdown, no communication with anybody from the outside. How could he possibly know this stuff about me?,” Bacon says. “It’s not factual stuff, it’s just instinct stuff. He says to me, ‘It looks like you’re in a new relationship, aren’t you?’ I’m like, ‘S—t. How does he know that?!'”

MEET THE NEW KIDS | Hunter Parrish (Weeds) and Ruth Kearney (Tyrant) join the cast this season as Kyle and Daisy, murderous pretty young things “that are just crazy in love with each other and really, really super-hot for each other,” Bacon says. “You just go, ‘Oh my gosh, I love those two!’ Then they’re doing some bad s—t.” Kyle and Daisy, as well as a new top-secret baddie played by Almost Human‘s Michael Ealy, gives this season a sense of “a gradual passing of the torch,” Bacon adds. “It comes up in a really subtle and insidious way, which I think is really powerful.”

JOE’S OUT OF CONTROL | But is it all connected? Purefoy won’t say (shocker!), but he will allow that “there is a much bigger network, a much bigger story, and Joe is a part of it. A big part of it, but he is just a part.” As you might imagine, that doesn’t sit well with the sociopath — “because his ego is so massive… of course he wants to be the big cheese,” Purefoy says. “But there are things in our lives we can control and things we can’t control, so you have to pay attention to the things you can control and let go of the things you can’t control.”

WORTH A SHOT | In that vein, I lob a hail mary and ask Purefoy if I can control whether he’ll divulge the identity of the person driving the van that saved Mark at the end of last season’s finale. “Yeah, no,” he says, grinning. “You can’t control that.”