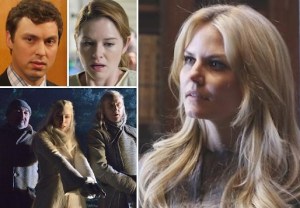 How is Once Upon a Time turning the tables? Will a Grey’s Anatomy secret keep? How will Sweets return on Bones? Who’s in a “bad place” on The Following? Read on for answers to those questions plus teases from other shows.

Is there any chance for Captain Swan scoop from Once Upon a Time? I miss them dearly! –Sarah
Series cocreator Adam Horowitz tells me that when Season 4B arrives on March 1, “The tables are turned” for the Storybrooke lovebirds when “Hook, after having Emma return his heart, will now have to fight to protect Emma’s heart.” From what, I/we can only wonder….

Can you give us Greys Anatomy fans anything on Jackson and April?! – Mark
As you can imagine, a “powerful” story is ahead for those two in the wake of Jackson overhearing Stephanie discuss with Dr. Herman the dire complication with April’s pregnancy. “For Jackson, who is a man of science, and April, who is a doctor filled with faith, it is going to be a very interesting struggle,” series creator Shonda Rhimes shared during our Season 11B preview Q&A. But know at least one thing: This won’t be about Jackson keeping the news to himself. “That would just make him an awful human being,” Rhimes said, “so we’re not playing that.”

Is it too soon to ask for Empire scoops? This show has become an instant fave in my house. — Aria
Lucious is poised to get some very good ink toward season’s end, when he is profiled by an audacious and irresistible magazine reporter. Thing is, drumming up good buzz about Empire’s looming IPO offering is far from this lady journo’s true agenda.

Can we expect any Hodgins and Angela storylines — together or separately — in the second half of the current Bones season? –Rachel
“Hodgins and Angela have something exciting happen to them – which is like the worst, most vague spoiler ever,” Michaela Conlin told me, laughing. Perhaps T.J. Thyne happened to elaborate? Previewing Cyndi Lauper’s next appearance on the show, he said, “Avalon ‘sees’ Sweets, which pisses Hodgins off, so Hodgins and Avalon go at it, with Angela caught in the middle. And that gets pretty intense!” (On a presumably lighter note, Conlin also teased an episode involving a poker game.)

Do you have anything on The Flash? –Sandy
Episode 16 is a real family affair, introducing both Captain Cold’s sister (played by The Tomorrow People‘s Peyton List) and Cisco’s brother (Sleepy Hollow‘s Nicholas Gonzalez). Of the latter casting, showrunner Andrew Kreisberg says, “We’re definitely going to see Cisco in his home environment, which is fun. Some of it’s based on the comic book work that Geoff Johns and Sterling Gates and I did, and some of it’s our own invention.” Bonus scoop: Episode 18 will unleash on Central City a bee-a-utiful tech wizard who rocks oversized shades and red lipstick… and has devised a clever-slash-amoral-slash-wildly unstable scheme to weaponize bee-sized ‘bots.

Longtime reader, yet a long time since you’ve shown love for The Middle. Care to change that? –Becky
Well, speaking of L-O-V-E…. Can you think of a reason why we’ll be meeting Sue’s boyfriend Darrin’s wedding-obsessed aunts in Episode 16?

Have we seen the last of Michael’s shady brother on Jane the Virgin? — Katie H.
Hardly! Ryan Devlin returns as the suspicious bro in Episode 12, airing Feb. 2. “We love Ryan,” executive producer Jennie Urman says. “So I’m sure he’ll pop up again.”

Do you have anything about Nurse Jackie‘s final season? Anything at all? –Stephanie
Be careful what you wish for, because showrunner Clyde Phillips is not a “happy endings” kind of guy. “No, I’m a believer in authentic endings,” he says, “and I think that the end of this season is as authentic as it can possibly be and will be really satisfying to the viewers.” Showtime boss David Nevins meanwhile describes the series finale as “a really appropriate ending. It’s funny, it’s frustrating, it’s emotional — all the things that Jackie is. There are a lot of complicated feelings at the end. I will say that I cried.”

Do you have scoop on either Defiance, Dominion, Once Upon a Time, TVD or Extant? –lilslim
I choose… Curtain No. 1! For Season 3 of the Syfy drama, I can confirm that Linda Hamilton will be back as Pilar McCawley, and there will be the introduction of a new alien race. (Ugh, just when I had all the others finally figured out.)

More Supernatural spoilers, always! Thank you. — Dee
Previewing this Tuesday’s episode, EP Jeremy Carver says, “Charlie definitely comes back from Oz somewhat different — and that’s an understatement. Things happened. And typically, what happens in Oz, stays in Oz, but not this time. It’s all coming back. Suffice to say, we’re going to see a Charlie that has been substantially changed.”

Is Jill Flint returning to The Good Wife later this season? Lana is so connected to the Bishop/Kalinda story arc. –Eve
Although Flint at this time is not (yet?) scheduled for another visit, she recognizes that Lana could (should?) figure into Archie Panjabi’s exit storyline. “There are a lot of fans who hope that that would happen – which makes me happy,” she shared at TCA, where she was promoting Season 2 of NBC’s The Night Shift – the source of occasional scheduling conflicts. “For a couple of seasons, [The Good Wife has] tried to give me an extensive arc with Archie, but unfortunately… we’re like ships in the night. We’ve never been able to fully realize it,” she noted. For her most recent, fall arc, “What they tried to do is take, like, eight episodes and cram it into three. So when Archie and I are together, we always try to infuse as much of the relationship as possible. Everything between the two characters is always between the lines.”

The Following‘s hiatus is a killer! Do you have any scoop on Max and Mike you could share? – Anna
Most simply said, per Shawn Ashmore, Mike is “in a bad spot” when Season 3 picks up, about a year after the events of Season 2. Because though Ryan is “in a happier place” with “the right woman for him” (played by Lost’s Zuleikha Robinson), Mike’s dogged pursuit of Mark Gray, the last surviving member of the family that killed his dad, has taken him overseas. “I’ve sort of taken off and let that relationship go, so Max has moved on,” Ashmore shares. “And I’m trying to get her back.” Bonus scoop: Ashmore also gave fair warning about this season’s new Big Bad, played by Sleeper Cell‘s Michel Ealy: “We cannot find a chink in the armor, we cannot find a weakness. It’s a totally different take on the extremely evil, powerful, demented villain.”

Can you give me any info on Chicago P.D.? –Miriam
“I think you’re going to start meeting Halstead’s family members within a few episodes,” Jesse Lee Soffer shares. “Possibly siblings coming somewhere in the next four or five episodes.” Meanwhile, Lindsay’s mother Bunny is set for an encore, “stirring up some sh-t and causing drama,” Sophia Bush says.

Amy and Jake have been seriously lacking on quality scenes together on Brooklyn Nine-Nine. Anything coming up with them? -Raven
Melissa Fumero told me, “It’s really fun where they take all of that – because it’s not going to be what I think people expect it to be.” When we spoke last week, she said, “We just shot some really fun Amy/Jake scenes, getting to see them be partners and do some cop stuff again…. It’s been a while!” – to which I of course had to say, “The title of Amy’s sex tape!” And we laughed. Good times.