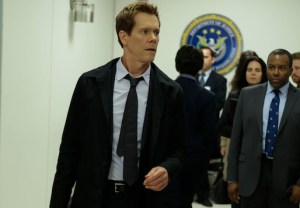 Kevin Bacon spends most of the first eight minutes of The Following‘s Season 3 premiere smiling. This is notable, because it’s the longest stretch we’ve seen the eternally tortured Ryan Hardy happy in the series to date.

And given what happens in rest of the hour, it’s likely the last time we’ll see him this way for quite a while.

What new ways have the depraved minds of the world found to torment Bacon’s beat-down alter ego? What threat lurks now that Joe Carroll is — for the moment, at least — locked away in a federal prison? Who was behind the wheel of Mark’s getaway car? And why, for the love of Edgar Allen Poe, hasn’t Ryan decided to fake his own death and retire to an isolated tropical island?

Allow us to catch you up with your Following favorites and how they fare in the season premiere, “New Blood.”

SOMETHING BORROWED, SOMETHING RED | As the episode opens, a year after the events of the Season 2 finale, Ryan is healthier and more buoyant than we’ve seen him in ages. He’s dancing with new girlfriend Gwen at the wedding of his FBI superior, Gina Mendez. He’s playfully dodging Gwen’s queries about living together. He’s awkwardly standing by as Max introduces Mike — who’s been in the field chasing Mark Gray for quite some time — to her new man, a hot FBI hostage-rescue guy named Tom. He’s looking forward to Joe Carroll’s scheduled execution in a month’s time. And he’s making toasts about love and all that good stuff… until the long-reaching hand of the absent Prof. Carroll rears up and slaps the smile right off of Ryan’s face.

A cater waiter who’s working the event chooses Ryan’s toast as the perfect moment to throw blood on him — and the brides — while calling Ryan a liar. The man sobs that his daughter died during the FBI raid on the Corbin compound, and that her blood is on Ryan’s hands. The incident sticks with Hardy, who investigates the next day. Too bad when he arrives at the dead girl’s house, her father looks nothing like the man who attacked Ryan at the reception.

MEET THE NEW KIDS | Turns out, Fake Dad is in league with two hotsie-totsie — and hot for each other — young psychos named Kyle and Daisy, the latter of whom poses as a prostitute to lure a randy couple to their deaths. (Side note: The husband was a total creeper, was he not?)

When Ryan and the gang eventually arrive at Kyle and Daisy’s murder scene, they find the corpses rigged up into a tableau, and the words “Ryan Hardy Lies” scrawled on the wall. A similar incident happens at another location — “Max Hardy Lies,” this time — and a light bulb flickers on in Ryan’s head: The killers are recreating moments that the FBI killed members of the Carroll-Gray House of Crazies. And that means: “Mark is behind this,” Mike declares.

O BROTHER WHERE ART THOU? | The surviving Gray twin is, indeed, the mastermind in charge of the new spate of deaths. His team consists of Fake Dad (whose real name is Andrew), Daisy and Kyle — oh, and Luke, who apparently now only exists in Mark’s fractured psyche.

The merry band of murderers hit an art fundraiser to find a posh blonde for their Mike-kills-Lily-execution-style tableau, and the FBI intercepts them but only manages to nab Andrew. The rest get away, killing yet another innocent person, while Ryan interrogates Andrew at the FBI. “What’s Mark to you?” Hardy demands — and a flashback shows us that Andrew was the mysterious figure driving the getaway vehicle the night Luke died. (Side note: Disappointing payoff on that cliffhanger, The Following.)

ALL’S TERRIBLE THAT ENDS TERRIBLE | The hour ends with the FBI team stymied (shocker!); Max hitting the bottle, hard; Ryan admitting he needs Gwen, despite pushing her (and her cake pops!) away earlier; Kyle telling Daisy they can’t leave Mark, whom they’re possibly secretly working against (at Joe’s behest, perhaps?); and Mark/Luke plotting to kill an FBI agent the next day.

What did you think of the episode? Did you miss Joe? Thoughts on the new cast additions? Is the Mark/Luke thing working? What are the odds that Gwen’s evil, too? Sound off in the comments!