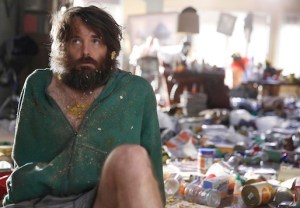 You know all of those gross things you do when no one’s watching? Fox has built a comedic series premiere around them — and Saturday Night Live alum Will Forte — and it’s called The Last Man on Earth.

In Last Man‘s double-episode kickoff, which aired Sunday, Forte’s Phil Miller traverses the country in the year 2020, “one year after the virus,” a subtitle informs us. As far as Phil can tell, he’s the last person left in the United States — possibly the world.

Rather than succumb to the crushing loneliness of that fact, Phil takes advantage of his unique position. He steals major works of art from national museums, then hangs them on the walls of the upscale home he commandeers. The sight gags alone are worth a chuckle: Phil’s haul includes Emmy statuettes, Babe Ruth’s bat, a dinosaur’s head and Emmanuel Leutze’s Washington Crossing the Delaware.

Cut to five months later, when an even more disheveled — and exponentially more desperate — Phil has a host of sports balls as drinking buddies… and he drinks a lot. He also uses an in-ground pool as a toilet, romances a mannequin and attempts to commit suicide… until he sees the smoke from a campfire in the distance. And when he arrives at the campsite to see a bra hanging among laundry on a line, it appears his prayers have been answered: Not only has another human survived the virus, she’s a woman.

Though Phil first imagines his new companion is someone who looks like True Detective‘s Alexandra Daddario, he soon wakes up and realizes she’s actually Carol (played by 30 Rock/Daily Show alum Kristen Schaal), a stickler for rules who takes it upon herself to find the “nice” Phil underneath the unrepentant caveman. He continually is irritated by Carol’s sunny outlook and insistence that they’ve survived because they have a purpose, but he soon finds himself helping her… albeit grudgingly.

What did you think of Last Man on Earth? Grade the premiere via the poll below, then elaborate on your choice in the comments!