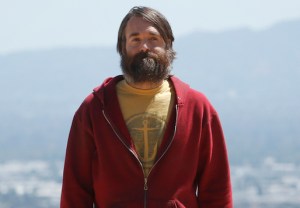 Though he’s The Last Man on Earth, Will Forte (maybe?) has some friends.

Steenburgen thus joins January Jones (Mad Men), Kristen Schaal (30 Rock), Cleopatra Coleman (Neighbours) and Mel Rodriguez (Getting On) on the guest-starring cast — though this doesn’t mean that Forte’s character, Phil Miller, is not [see show title]. Instead, some or all will appear in flashbacks or via other narrative devices. (Alluding to another castaway-themed program, executive producer Phil Lord promised with a laugh, “This is not going to be like Gilligan’s Island, where we have the Harlem Globetrotters drop by.”)

Besides, in a knowing nod to Tom Hanks’ Castaway — whose survival tactics Phil at first mocks — The Last Man on Earth eventually finds company in a posse of pals he fashions out of tennis, billiard, ping-pong and other balls. “Will personally drew every single face on every single ball,” Lord revealed. “And named them.”

Last Man on Earth picks up some time after a “virus” has obliterated nearly everyone on the planet. When not leaving messages around the country for any other survivors to come find him in Tucson, Phil embraces being able to do whatever he wants — such as hurl a barrage of bowling balls into a pile of fish tanks, an experience Forte counts among the favorite of his career.

If thrust into his own “last man on earth” scenario, Forte avowed, “I think i would just go around and break stuff!” Lord in turn noted, “Part of the fun is keeping the show grounded in realty, what it would be really be like. The wish-fulfillment, what actually comes out of being the last [man] on earth.”

That said, certain realities will be dodged. For example: Being a comedy, don’t expect Phil to repeatedly stumble across dead bodies a la The Walking Dead or the like. (Aside from a few casual mentions of the virus’ victims, “We avoid that subject,” Forte said.)

Rather, any “gross out” factor comes from Phil himself, who throws hygiene to the wind as he regularly wades in as well as drinks from a kiddie pool filled with margaritas, starts an increasingly sizable landfill just off his appropriated house’s terrace, or saws a hole into a diving board as he turns a full-size swimming pool into a toilet. (There were discussions, the producers said, about “how brown it cold be, how many floating things there could be….”)

For the role, Forte famously grew his beard for eight months straight, starting in March of last year — ultimately resulting in an appearance that put passersby ill at ease.

“There would be a lot of street crossings” as he approached on the sidewalk, Forte shared. For not only had his bushy beard grown “past the hipster length,” he also let it expand sideways, away from his cheeks his temples. As he notes, “That’s not something someone with a rational mind would do!”