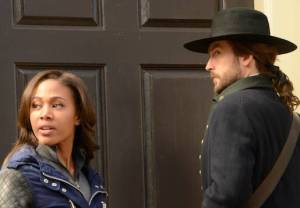 Ding dong , the witch is dead.

Sleepy Hollow‘s fast-paced second season-ender was, for most of the hour, a mirror of the series premiere — but with Abbie the woman-out-of-time and Ichabod the skeptical authority figure.

The Witnesses’ chemistry, however, remained the same.

The similarities ended, though, when Mills thwarted Mrs. Crane’s attempts to rewrite history (read: kill Ichabod and leave him dead this time) and restored both of the women to the present day — where Katrina promptly tried to kill Abbie, tussled with Ichabod and wound up dead, mortally stabbed by her own knife.

Sleepy Hollow showrunner Mark Goffman granted TVLine an exclusive interview to chat about the finale, the season as a whole and what the series might look like if/when it is renewed for a third season.

Read on to hear what he had to say — and come back tomorrow, when we’ll have star Tom Mison’s take on the events of the finale.

TVLINE | So now we have Hawley gone, Katrina and Henry dead, and a re-focus on Abbie and Ichabod as partners: Is this a reset of the series, based on fans’ sometimes harsh feedback throughout the season, or were these past two episodes the plan all along?
This had very much been the plan from the beginning. It just took a while to get there. But we always wanted to keep the show focused on them and always knew that some form of this was going to be the ending. Of course, you always want to give yourself room during the course of the season to see how things are playing and see how audiences are reacting, how the writers are reacting, how the cast is meshing, but ultimately, this really felt like the right way to end both this season and launch Season 3.

TVLINE | Moving forward, will we see Ichabod harbor any anger at Abbie for shooting Henry? Will we see him feel a lot of guilt over the way Katrina died?
There are so many stories to tell. Some of it is in the aftermath of these incredible, emotional moments that these characters went through here. Obviously, for the better part of two seasons, Crane has been wishing his wife were free from Purgatory, but it didn’t really play out the way it had planned or hoped. There’s a lot of room to continue telling the story. There’s also the ability to launch in a whole new trajectory, because there really is more to both of their lives that they’re going to find out in these many years of trials and tribulations.

PHOTOS | Quotes of the Week: Your Favorite Zingers from Scandal, Sleepy Hollow, Jane the Virgin and More

TVLINE | Whose idea was it to make Ichabod’s birthday Abbie’s passcode?
[Laughs] I really wanted that sequence to be painfully long, because I just thought seeing Ichabod Crane in that world, who’d never experienced a piece of modern technology — I actually took my iPhone and started going through all of the things I would do if I had seen it for the first time — even though it’s remarkable that my 18-month-old can figure out how to use an iPhone. [Laughs] And then I thought, ‘Well Abbie’s clearly going to have a passcode on there.’ I used my birth month and my wife’s birthday as the code. Then Tom [Mison] is so great with the physical humor, when it says “Slide to the right to open,” he runs it along the table. He’s just brilliant. We knew we can give him those moments, and they’re always really fun.

TVLINE | When you and I spoke before New York Comic-Con, you said that neither Abbie or Ichabod are the kind of person who would break a marriage vow or be complicit in the breaking of a marriage vow. Katrina’s no longer around… has a door opened for something much farther down the line?
Their friendship and their bond as Witnesses is first and foremost and at the forefront of their relationship. They are extraordinarily different people who have incredible chemistry. But we’ve seen all season long, the mission has to take precedence. I think that there’s plenty area outside of romance that works in their relationship; I don’t know if any of that is worth risking or worth getting into and certainly not immediately following these events. I would say I’m certainly not looking for them to be romantic anytime soon.

RELATED Where is Sleepy Hollow‘s Kindred? Tom Mison Has a Marvel-ous Theory

TVLINE | You had more episodes this season than last season.
Almost 50 percent more!

TVLINE | Is Sleepy Hollow a show that works better with a smaller episode order? Or is it the opposite: Would you have preferred more episodes this season?
Season 1, we were all kind of finding it. Thirteen episodes worked great because we really wanted to go balls to the wall as these two were cascading into very unknown territory. In Season 2, I liked that we were able to take a little more time with them and not every story necessarily tied to the overall [arc]…

I think that 18 is a pretty good meeting in the middle… It’s not going to have that same kind of momentum with an event show like you find on a lot of the premium channels. [If we were doing 13 or 10], this would’ve felt much more novelistic and much more like Season 1. But there are people who are going to like it more and we do see a lot more of Abbie and Crane, hopefully build out more of their world.

TVLINE | Have you had any talks about how long the coming season, if you’re renewed, will go?
Have not.

TVLINE | I’m going to throw questions — big and small — about various points in the season at you now, cool?
Sure.

TVLINE | Where was the Katrina that was supposed to be in 1781?
Oh. So, a very simple rule in time-travel: If you go back into the past, if you already exist in the past, you conveniently inhabit that body. I don’t know if you were aware that that was the physics. [Laughs] If you don’t believe me, try it!

TVLINE | The battle at the beginning of the episode looked like the biggest one you’ve shot since the pilot. Was it?
Yes. This [episode] was extraordinarily ambitious… [Series co-creator/EP] Len Wiseman actually shot that battle sequence. It’s got the Wiseman genius to it.

TVLINE | Is Irving completely out of the woods, evil-soul-wise?
I love where we are leaving Irving’s character. I can’t wait to see what mysteries may come forward now that his soul has been released from Henry’s grasp and he is now back. He was dead; he did die. There’s some really fun story territory that I think we’ll get to show there.

TVLINE | Will we see Sharif Atkins’ character, Calvin Riggs, next season?
I got to work with him first on White Collar, was familiar with him for a long time. I feel really lucky that we got to bring him in to Sleepy Hollow this season. I really hope we do get to see him again. I thought he was great, the chemistry is a really interesting character for the show. 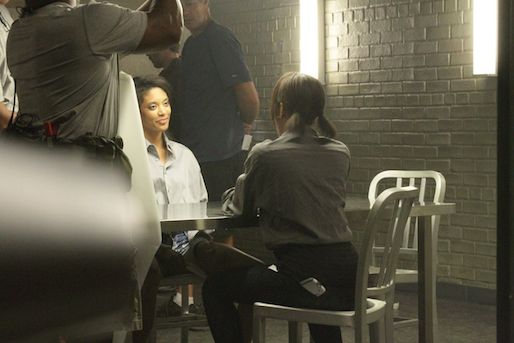 TVLINE | The show released a cryptic photo (see right) on its Facebook page before the season started, and at the time, fans speculated that it might have something to do with Abbie’s mom. Can you enlighten us?
That’s a rehearsal with our stand-ins. Kristin Holloway is facing us. Interestingly, she got a cameo in “The Awakening” toward the end of the episode, when the bell tolls and we see Sleepy Hollow residents on the street. There’s a shot of her eyes turning white.

TVLINE | We didn’t see Neil Jackson in the final episode; any chance we’ll see him return as Abraham? I know he has other work now.
He’s shooting a pilot down in Australia. We couldn’t make the dates work. He’s been such a gift to the show; he’s fantastic. I really hope we get to see him. He’s terrific.

TVLINE | Tom Mison has a theory on where The Kindred is. In the writers’ room, do you guys have a plan for The Kindred?
We have an endgame for it. We didn’t need to play that card this season, but clearly, The Kindred not only is a really cool creature and the first of our own — meaning Abbie and Crane’s design — but also, he’s got the Horseman’s head. So he’s critical to having the Horseman of the Apocalypse come to fruition. The Horseman of Death needs that. So it definitely will play into future storylines.

TVLINE | In the Thomas Jefferson episode, why did Abbie and Ichabod have to blow up the fenestella? It seemed like a very all-or-nothing move from people who always seem to find another solution to problems like that.
In the moment, there really wasn’t the ability to salvage it. And that was incredibly unfortunate. I really wish that they could have. It’s a shame that they weren’t able to [do it] but this is also something that we have a plan for in the future that we’ll be able to elaborate on.

TVLINE | At one point in the finale, Ben Franklin tells Abbie he’s surprised she hasn’t encountered more modern-day people who know about the secret war. It read to me as foreshadowing. Was it?
[Laughs] Yeah, I think so. I’m so glad you noticed that…. That’s something that will play out.

TVLINE | I know Tom hates selfies. Did that inform his rant during the video?
It’s funny how pieces of the character come out of conversations you have with the cast. We had talked about karaoke once, and that evolved into an episode. It was a nice little moment that both the character of Ichabod Crane can make a comment — we’re actually going to put the entirety of that scene online. There was a little bit more, the way that it played, we didn’t feel that we had to play the entire scene out but we actually shot a whole scene of Abbie and Crane together. We just thought it would be a nice moment.