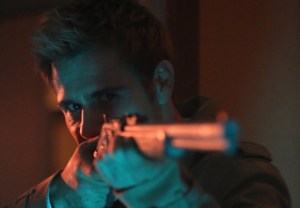 There’s a moment, almost midway through Constantine‘s Season 1 — and quite possibly series — finale, when the irreverent exorcist reminds Zed that there’s only one sure thing in life: It ends.

“We can all shape our destiny, but none of us get to escape our fate,” he says. “So when my time’s up, that’s it.”

It’s a fitting quote for the last episode of what likely will be the supernatural series’ only season. Let’s review what happens in the rest of the episode, titled “Waiting for the Man,” then you’ll weigh with what you thought of the hour.

AND YOU CAN TELL EVERYBODY HE’S THE MAN | The episode’s very creepy case of the week involves a backwoods Louisiana dude known as “The Man” who kidnaps little girls and makes them his “brides.” Gross. We see one girl get taken at the top of the hour; when she comes to in his home, three girls of similar age — and wearing lacy, long-sleeved wedding gowns — attend to her and spin tales of how great life will be when she marries The Man.

Constantine and Zed arrive in the bayou area after Jim Corrigan calls about a mummified cop; the officer was working on the case of several missing girls in the area. From the marks on the corpse’s body — yeah, they dig it up — John divines that the guy they’re looking for is a Satanist. Lovely.

And then the rotting body sits up and addresses John by name. Actually, it’s Gary Lester’s spirit, temporarily inhabiting the corpse to deliver an important memo from the underworld to his old pal: There’s a price on his head, and he’s in grave danger.

AFTER MIDNITE, WE’RE GONNA LET IT ALL HANG OUT | Cut to Papa Midnite, who kills a man and then reanimates him as a Constantine-seeking voodoo zombie. Papa wants to kill John in order to release his sister’s soul from eternal damnation or something. (Honestly, there are so many people eternally damned in this show, I lose track of who’s doing what and why.)

After much tussling and shooting and some parlor tricks of his own, John gets the drop on Papa Midnite and turns him over to Corrigan’s cops, freeing Constantine up to join Zed and the detective at the address where they’ll find the girl. (There were visions, hair-eating and electrocution involved; all you really need to know is that Zed’s conflicted about telling Corrigan she’s seen him dead, and that it’s messing with her ability to be a productive member of the team.)

BETTER DEAD THAN WED | The kidnapped girl gets away from her creepy groom-to-be, and Constantine & Co. show up just in time to save her. Corrigan is going to take the man into custody, but Jim convinces him to kill him, instead. (Seriously, just like that. I mean, yes, he’s total slime and deserves to die a thousand deaths, but still…) And as John’s checking out The Man’s house, he finds the long-dead bodies of the other missing girls — aka the trio of baby brides who were hanging around the newest girl earlier. (He frees their spirits, though, so all’s good.)

THE DEVIL IN DISGUISE? | With the case closed, Zed finally gets up the courage to tell Corrigan that she’s seen visions of him deceased. Interestingly, the cop takes it in stride. “If I’m gonna die, I’m gonna make every moment count,” he says, and then kisses her… which Constantine witnesses.

Outside, Manny appears to The Blonde One and they have what seems like a little mutual pep talk, full of phrases like, “We can win this war” against the Brujeria, which we all know by now is behind the oft-mentioned Rising Darkness Yay!

BUT, soon after, the cop car Papa Midnite is in freezes to a halt, Manny-style, and the winged one appears to the voodoo priest. He frees him from his handcuffs and says he’s canceling the contract on John’s life.

“You work for the Brujeria?” Midnite asks, surprised.

And that’s where we’re left, Constantine fans. A cliffhanger if ever I saw one, though one with not much chance of resolution. See you in the funny papers!

We want to know what you thought. Grade the season finale of Constantine via the poll below, then elaborate in the comments!