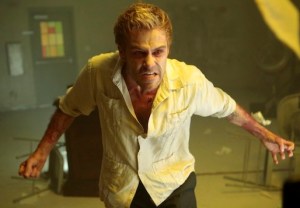 INXS sang that every single one of us has a devil inside, and boy, does John Constantine know it.

This Friday’s episode of NBC’s Constantine (8/7c) finds the self-proclaimed master of the dark arts inhabited by a demon he summoned to do battle with an even more heinous baddie.

When the initial threat passes, though, John is left with an otherworldly co-pilot who doesn’t want to leave.

“John has to push himself to an extreme and really go somewhere he doesn’t want to to do this, to save his own life,” star Matt Ryan previews.

Ryan chatted with TVLine about Constantine’s latest dilemma, the series’ shortened season and the cast’s efforts to cope with what may well be the end of their show.

TVLINE | The last time we saw Constantine, he was bleeding in a sewer, a demon was bearing down on him, and he had been shot by one of his old lovers. I’m imagining that we pick up from there?
Yes, we do. Episodes 8 and 9… are probably my one or two of my favorites.

TVLINE | John summons a demon to go into him to save his life. Can you tease how that goes for him?
It’s interesting [for] an exorcist, who knows all about demons and excising demons and managing them, for him to actually have one inside himself. The most interesting to see is John going through this struggle knowing he only has a certain amount of time before this thing is going to take over him, and then what are his options to survive that? You see him really struggling with that.

TVLINE | It looks like the makeup in this episode is slightly more intense than what you usually have to go through. But maybe not as bad as the pilot
In the pilot it was a demon showing John what he might become. Here what you have is actually John going through this transformation. So yeah, it still gets pretty gnarly.

TVLINE | The episode’s synopsis says that Zed is involved in trying to save John. Does she physically come to Mexico City?
She does, yes. 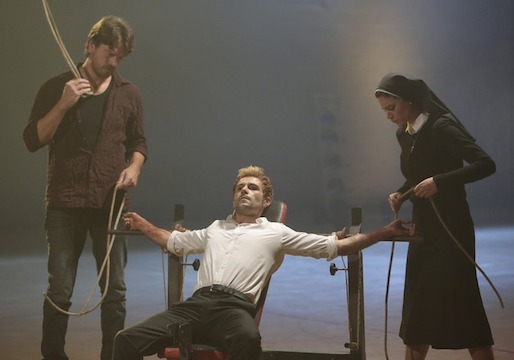 TVLINE | So that means she and Anne Marie are in each other’s proximity. Can you tell me how that goes?
They do cross paths. Obviously, Anne Marie’s history with John is very unique. She felt she had to make this sacrifice to save kids, but then also she does have a conscience. What happens is they enlist her to help John get through it. It’s like all of the team coming together to help John get through the thing. That relationship is an interesting one: two women from completely different parts of John’s life interacting.

TVLINE | Two women who want, or have wanted, his action at some point.
Exactly, yeah. [Laughs] There’s a great moment yet – I don’t know if I should say it, actually… You see these two women, and John sitting in the middle with a demon inside of him. That’s really funny.

TVLINE | We know that Felix Faust is coming, and in the next episode, there’s a big coma creeping across Brooklyn, and Chas’ daughter is involved. What can you tease?
John has a previous relationship with Felix Faust, but he doesn’t know that Felix Faust is responsible for the goings-on in Brooklyn and New York. The episode really is about Chas’ backstory, and how Chas came about his powers then, and John’s relationship early on with Chas. We have a little flashback which explains a few things about Chas and John and that relationship. Also, [we learn about] John’s relationship with Chas’ family and Chas’ wife not liking John enough and how they have to negotiate that. We really do dig into Chas’ backstory a little bit and get underneath all of that.

TVLINE | Have you wrapped Episode 13?
We have wrapped, yes.

TVLINE | What was the mood on set as you shot that episode, knowing that it may be the last?
It’s always sad when you come to the end of any job. But there was a real kind of upbeat spirit as well and [executive producer] Daniel [Cerone] was on set, and it was great. We all kind of dived into that last episode and gave it our all and just enjoyed it. It was great.