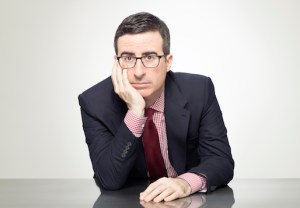 As of right now, he couldn’t tell ya.

“I don’t know,” he says when asked at a press event held at HBO headquarters in Manhattan. “We have a couple of options that we’ve been working on.” The final call will get made the next day, and it will include input from the series’ writers’ room and research staff — the latter of which has been beefed up considerably for the new spate of shows.

In fact, Last Week Tonight‘s research team has quadrupled since the series’ start; it now includes former The New York Times Magazine, ProPublica and Al-Jazeera staffers. The expansion was necessary, Oliver says, in order for Last Week Tonight to keep cranking out the in-depth, long-form bits for which it has become known.

Conventional wisdom claims that the topics of those segments — which range from the Miss America contest’s fudged philanthropy to the plight of translators who help the U.S. Armed Forces — coupled with their roughly 15-minute length, make them the most skippable of Web content.

The British comedian calls all of that “nonsense.”

“You have to have a pretty intense level of contempt for the American people if you think, ‘Oh well, people will only watch something if it has someone being smashed in the nuts or something,'” he says.

His wisdom bears out, particularly when you look at Last Week Tonight‘s viral reach. Videos of each episode’s main segment, which HBO posts on YouTube, draw eyeballs all over the world. Upon recent checking, a story on FIFA’s questionable stewardship had more than 9 million views — many of those, Oliver says, in countries like Brazil, where the premium cabler doesn’t broadcast.

Still, “I don’t feel like we’ve really settled in yet,” he says. “I’m still slightly bamboozled by the success.”

Read on for more highlights from Oliver’s remarks, including behind-the-scenes details on one of last season’s funniest, fishiest stories.

CREDIT WHERE CREDIT’S DUE | Oliver frequently references his Daily Show roots and how Last Week Tonight wouldn’t exist if it weren’t for his old boss, Jon Stewart:”He gave me my DNA. He taught me everything.”

CREDIT IF CREDIT’S DUE | Last year, after Oliver directed Internet trolls to focus their ire on the Federal Communications Commission and its role in net neutrality, the FCC’s Web site was incapacitated by thousands of online comments. But the Brit takes no credit for helping the conversation along. “We just identified a problem, pointed at a means by which people could express their disgust with it, and then they did it,” he says. “I think you can read too much into our involvement there.”

MORE TO COME | Last Week Tonight‘s second season will consist of 35 episodes, compared to Season 1’s 24. The series will take a few breaks during the run, Oliver says, and will wrap in mid-November.

CARTE BLANCHE | Oliver says HBO has given Last Week Tonight free reign. “We can make the show fit the story we want to tell,” he says, joking, “It’s kind of a paralyzing level of freedom.”

A VOTE FOR PATIENCE | Don’t expect Last Week Tonight to deal with the upcoming presidential election for a while. “There’s a time and a place for that,” Oliver says, mocking cable news channels’ early obsession with the race, “and it’s 2016.”

THE ONE THAT DIDN’T GET AWAY | Mention the salmon cannon, the topic of a star-studded segment in Season 1 (see video below), and Oliver instantly starts chuckling. Here’s the story, in his words: “We started putting out the feelers of, ‘Would you like to have a salmon hit you in the face?’, and it was just an amazing amount of yeses… When we were getting The Simpsons‘ and David Letterman’s coming in — even when I heard that David Letterman said yes, I still was not expecting to see a fish thrown at his face. [Laughs] That took a couple of months of just preparing the salmon [laughs], mailing the salmon, throwing the salmon and getting the tapes back… It was really fun. We are going to try and do some long-term mayhem production things like that [in Season 2]. We’ve been trying to think over the last few weeks of things we could spend months building that have no tangible value whatsoever. [Laughs] It was just one of the most joyful two minutes of TV.”