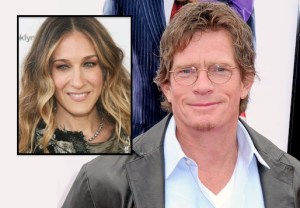 Emmy winner Thomas Haden Church is set to get slapped with a Divorce by Sarah Jessica Parker, as the male lead of HBO’s comedy pilot about “a very, very long divorce.”

Sex and the City alum Parker stars as Frances, a woman who suddenly begins to reassess her life and her marriage, and finds that making a clean break is harder than she thought. Church will play Robert, the man who is surprised to learn that his wife’s perspective on their marriage is quite different from his.

Church’s TV credits include the miniseries Broken Trail (for which he won an Emmy), Wings and Ned & Stacey, while his film resume includes Sideways (for which he netted an Oscar nom) and Spider-Man 3 (as Sandman).

Additionally, Divorce has added Saturday Night Live vet Molly Shannon as Diane, Frances’ high-strung friend with a successful husband, beautiful house and zero kids, while Talia Balsam (Mad Men) will play another of Frances’ gal pals, Dallas, who has been both widowed and divorced.