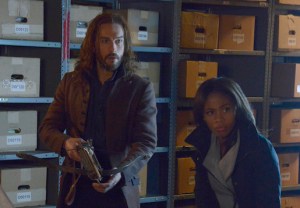 I just knew [name redacted because it’s a huge spoiler so you’ll have to wait to read it after the jump] was up to no good!

I’m talking about Sleepy Hollow‘s Frank Irving, of course, who this week reveals himself to be every bit as much in Henry’s pocket as the contract he unwittingly signed in blood would have you believe.

Makes sense: When have you ever gotten out of paying a lawyer something he or she is owed?

In related news: Katrina, get yourself together! Just because you dress like Bad Willow doesn’t mean you have to act like her!

Let’s review what happens in “Spellcaster.”

BLOODY HELL | Employees at an auction house catalogue some newly arrived goods, including the journal of a famed magic scholar. But when the female employee is alone, all of a sudden a shadowy figure appears behind her. It’s a guy who kinda looks like Jagged Little Pill-era Alanis Morissette in a pilgrim hat, and he really, really wants that book. (Side note: It’s That Thing You Do!‘s Johnathon Schaech.) He slits his wrists (ew), speaks something that sounds like parseltongue and then grabs the journal. Meanwhile, the unlucky employee and the security guard who’s come to her aid grab their faces and scream. Sorry, guys, but U oughta know better than to engage with someone who’s so clearly a creepster.

LOCATION, LOCATION, LOCATION | Across town, a slightly panicked Abbie skids into a strange house and wonders why Ichabod has summoned here there. Turns out, he’s thinking about buying a house, and he wants her opinion on a three-bedroom Craftsman. Once Abs has decoded all of the realtor’s euphemisms and Ich has availed himself of a few mini-muffins, he admits that he’d need some very important things (a credit rating and source of income, for starters) before he can seriously start thinking about moving out of Corbin’s cabin and into a new place, “preferably with granite countertops.” (Heh.)

Abbie fills him in on the auction-house corpses, whose blood was boiled in their bodies, and shows him a photo of what was stolen. He recognizes it as the Grand Grimoire, a repository of some serious mojo, and suggests they consult their in-house magic expert for more info.

WITCH WOES | At the archive, Abbie has a friend from Quantico help with pulling Alanis’ image from the reflective surfaces in the security video. Though Ich is stymied by the “pix-ellls,” they’re all brought up short when Katrina — whose power is gaining strength the more she practices — recognizes the auction-house killer as the Rev. Solomon Kent.

The baddie, briefly: Kent was a Puritan pastor/powerful witch in 1690s Salem, Mass., and Katrina’s grandmother Helena was in his parish and in his coven. He accidentally killed the object of his affection, then did a spell that made her look like a demon so it would seem that he was doing the Lord’s work by offing her. Helena urged him to come clean, so he outed her as a witch and she was hanged. Boom, Salem witch trials. When Helena’s coven eventually caught up to Kent, they exiled him to Purrrrgatree, but he escaped when Moloch was killed.

Ichabod quotes Edward R. Murrow (Oh Crane, you already have my heart. No need to showboat.) and then notes that the grimoire is incomplete, by design: Kent will have to find the second part in order to achieve his goal, which Ich theorizes is to bring his Puritan ladyfriend back from the grave.

THE DARKNESS IN ME ACKNOWLEDGES THE DARKNESS IN YOU | The Witnesses and Katrina track Kent to a warehouse where he’s found the journal’s missing pages; before the action goes down, Ichabod asks Abbie if she’s thought about what the life ahead of them will be like. She says no, but then they agree that they have to fight for the good stuff in order not to lose their way like Kent did. Then, the evil preacher shows up and bitch-slaps them out of the way, mystically.

With both Witnesses down, Kent faces Katrina and tells her “If witches have agency in this world, it is because of meeeeeee.” (Side note: I have a feeling that statement would be way more badass if he didn’t do that weird flappy-arm cape move. Calm down there, high school drama club.) Then he summons two blood monsters to chase Abbie and Ichabod, cajoles Katrina into conjuring some dark magic (interesting, eh?) and escapes with the rest of the journal. Way to go there, Kat.

WELCOME BACK | Back at the cabin, Ichabod remembers hearing Kent say something about being a traveler, which jogs Abbie’s memory about a spell in Grace Dixon’s notebook. They piece together that Kent doesn’t want to bring his love back, he wants to open a portal through time and go back to her. This could possibly change both of their lives forever, so they — and Irving, at Abbie’s invitation — gather a bunch of stuff together to take Kent down. Oh, and Katrina takes a nap.

In the woods, Kent opens the portal, but a quorum of Team WTF takes him down before he can go back in time. They incapacitate him, then Crane starts whaling on him until Abbie pulls him off.

But where’s Irving, you ask? Oh, he’s just stealing the grimoire and breaking Kent’s neck, then lying to the Witnesses about it. Frank, I’m SMDH: Shaking my disappointed head. Later, Ichabod muses about Kent — “that a person could so easily betray the people who trust and rely on him most” — while Irving delivers the grimoire to Henry (!), who’s got his groove back after killing (?) some thugs in a motel parking lot, and Katrina tries out some magic but can’t stop herself from going dark. And by “going dark,” I mean “completely sucking the life out of the object of her spell and then turning it into dust while she goes all milky-eyed.” This should prove interesting as the finale rapidly approaches…