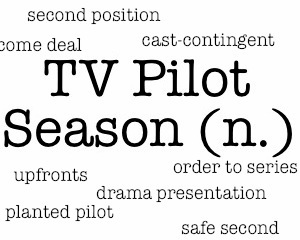 Pilot season is upon us, meaning the broadcast networks are taking stock of their needs for 2015-16 and getting the ball rolling toward filling any gaps. With things about to get really interesting — meaning it’s time to start booking actors for these wannabe hits! — TVLine presents  its annual round-up of who’s planning what, and well as our guide to the lingo that gets tossed around.

For easy access: Review the list of pilots for ABC, CBS, The CW, Fox and NBC, and we urge you to bookmark this constantly-updated page for the latest intel.

PILOT | You really want to get basic, eh? When a network orders (or “picks up”) a pilot, they’re asking its writers/producers/studio to cast and produce a close facsimile of what a series’ first episode will look like. Each pilot is reviewed by network brass, then typically put into testing before its fate is decided.

PLANTED SPIN-OFF | Also called a “backdoor” pilot, this is an episode of an existing series that sets up a prospective offshoot. For example, Arrow once aired a pair of episodes focused on this lad named Barry Allen, and that was a planted pilot for The Flash. Free History Lesson: That Brady Bunch episode with new neighbor Ken Berry adopting three orphans? That was a(n ill-fated) planted pilot, for a spin-off to be called Kelly’s Kids.

DRAMA/COMEDY PRESENTATION | Occasionally, due to time or budget restraints, a network won’t order a full pilot but a “presentation” of a not-quite-complete drama or a taste of what a sitcom would look like.

CAST-CONTINGENT | Sometimes a network will order a pilot with the caveat that production can’t start until a suitable (read: “name”) actor has been cast in a starring role. (One translation: “The premise is iffy, but a big star could really sell us.”) So you’ll sometimes hear that with the casting of so-and-so, “the cast contingency has been lifted” on a pilot. (The sorta flip-side is an “if-come deal,” meaning the major players are pre-signed and rarin’ to go the instant the network picks up the pilot.)

SECOND POSITION | These are the two words that makes fans of “bubble” shows most nervous each spring, as stars from low-rated series start booking pilots (provided they get the OK from their current bosses). The term literally means that the pilot role is in second position (or priority) should their show wind up renewed. An actor booking a second position gig doesn’t always mean his/her current show is doomed… though it often tends to. Variation: A “safe second” means the pilot’s bosses have been discreetly all-but-assured that the actor will be available.

UPFRONTS | The week in mid-May when the networks take turns unveiling their schedules for next season — including the pilots that have been ordered to series. With rare exception, if your show doesn’t make the cut here, it’s officially a goner.

And now, our running update of pilots ordered for the 2015-16 TV season, going network by network….