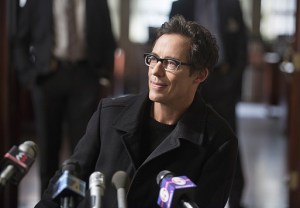 No, not the one about him being Reverse-Flash, but the fact that he knew the particle accelerator might explode yet went ahead with the launch anyway.

Meanwhile, Joe couldn’t ignore his instincts that Dr. Wells is hiding something and thus tasked Eddie with investigating him.

Here, executive producer Andrew Kreisberg reveals when we’ll get answers about Wells’ mysterious plans and what toll Joe’s secret will have on his relationship with Barry. The EP also previews Hartley’s future and the introduction of Barry’s new girlfriend.

I’M FRIENDS WITH THE ‘MONSTER’… | Dr. Wells’ “endgame will happen this season,” Kreisberg promises. “Wells has a definitive plan. When you look back, you’ll see he’s had a definitive reason for doing all the things that he’s done throughout the course of the season. We think it makes sense. Hopefully, you all will, too.” And it sounds like Barry’s mentor is truly a villain despite some of the good he’s done for the Speedster. “As secrets start to come out, how do you reconcile the Harrison Wells that we see in this episode, who’s a friend and selfless and kind, with this monster?” the EP posits. Another big question in the writers’ room after the doc’s identity was revealed to viewers: “The only debate we had amongst ourselves was how long will the audience accept knowing he’s the villain and having the rest of our characters not know, which is something we’ve been dealing with for the back half of the season. Are people going to feel like they’re dumb for not realizing this? Part of what’s keeping these next stream of episodes going is how good at hiding his villainy Wells is, and how strong Tom [Cavanagh]’s performance is.” 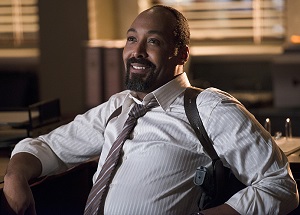 EXAMINING THE DOCTOR | Joe and Eddie’s secret mission to dig into Dr. Wells’ background will unspool “in pretty interesting ways,” Kreisberg teases. “In an upcoming episode, Joe and Cisco – without letting Cisco know what he’s really thinking – launch a pretty spectacular investigation into what happened the night Barry’s mother died, which plays out in a really cool way.” While their plan is “definitely going to be causing problems for everyone,” Joe and Barry’s father-son bond will not suffer in the process, Kreisberg assures. “It’s more about what they’re going to do as opposed to creating a schism between them.” 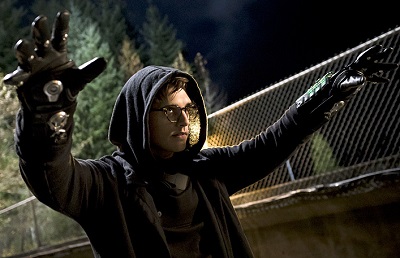 PIED PIPER’S ENCORE | Viewers won’t have to wait long for Hartley’s threat against Cisco — he’ll soon let him free because he has intel on Ronnie’s whereabouts — to come to fruition. “The repercussions of that will play out in the next episode,” Kreisberg previews. “Caitlin’s reaction to this information and also the knowledge that Cisco closed the door on Ronnie in the accelerator is both surprising and not at all surprising.” As for the Pied Piper’s future, Kreisberg is “hopeful” that Andy Mientus (Smash) will reprise the role beyond next Tuesday, and that redemption is possible for the character. As such, the EPs took care to make sure that while Hartley “tries to kill people, there are no actual deaths.”

PICTURE PERFECT | Shockingly, that selfie – which, if it got into the wrong hands, could mean big trouble for Barry – will not rear its ugly head again. “We don’t have any plans for that to bite us,” Kreisberg admits.

MAY THE FORCE BE WITH YOU | You may have noticed that the show made its first mention of the Speed Force this week, which plays a big role in Flash comic book lore. “For now, it’s a catch-all phrase that speaks to a grander universe and a grander power and, ultimately, grander abilities,” Kreisberg says.

LOVE IS IN THE AIR | Looking ahead to Barry’s romantic life, Kreisberg describes love interest Linda Park (played by The Vampire Diaries‘ Malese Jow) as “a spark plug. She’s a firecracker. She’s a lot of fun. She’s ballsy and she speaks her mind and she’s cool. Barry can’t believe that somebody like her is interested in him.” Her presence will also “cause all the other women in his life to maybe see a little green.”