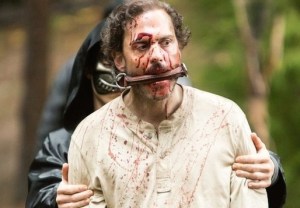 Monroe faces almost-certain death at the start of this Friday’s Grimm (NBC, 9/8c). He’s beaten. He’s surrounded by angry men in robes and masks. He’s just become aware that one of his fellow prisoners was turned into a Wesen shish kabob by a hate group opposed to supernaturally mixed marriage.

And still, portrayer Silas Weir Mitchell says, all the Blutbad can think is: You morons.

“It’s that thing where people who want to perpetrate a horrible act, they need some justification for it,” the actor tells TVLine. “So instead of just throwing me onto the pike and burning me, they’ll go through the proper channels and have a proper tribunal before they impale me and burn me.”

As the intolerance arc draws to a close, we chatted with Mitchell about how being a Wesenrein target will affect Monroe’s outlook on life (assuming he still has one at the end of the hour), how you really don’t want to get in the way of a ticked-off Rosalee and how much of the couple’s honeymoon — yep, it’s actually going to happen! — we’ll get to see on screen.

TVLINE | As Monroe looks around at everyone who wants him dead, is he thinking, “This is the end?”
You know, hope springs eternal, especially on TV. Other than fear of death, [he’s considering] the ludicrous nature of these hate groups and how far they go in their hatred and racism. Underneath Monroe’s fear is the sense of how pathetic these types of groups and these types of people are — almost an incredulousness about the lengths these people go to to dress up their sicknesses.

TVLINE | Did you do any research on hate groups throughout history?
You just need to open The New York Times when you’re doing research on it. It’s the world we live in, where people have these really backwards, divisive, murderous, hateful, basically f–king idiotic ways of looking at the world, and they have to put on their suits and their robes and their masks and then they can slice the person’s throat because they’ve decided they have all these other people around them saying yes, this is the right way. It’s for religion or it’s for the homeland or it’s for whatever structure you want to hang the hate on… A lot of that is running through my mind when I’m on my knees in front of these ding-a-lings. “Boy, people will do anything to justify the way they think.”

TVLINE | The performance in the last episode and this one are a bit more physical than you’re used to. Did it take any toll on your body?
You’re a little stiff when you’re running with shackles on, and my wrists were bruised for a long time from wearing handcuffs. But all of that stuff just feeds the feeling for the story… When I read these two episodes, I thought, “Oh boy, am I in for it.” At the end of the day, it wasn’t as bad as it could have been at all. They take very good care of me. The stunt guys are great. The directors are very aware of not wanting to really beat the crap out of us.

TVLINE | So you didn’t go all Method.
You just go as far as you need to go to get the flavor, and then you sell it. I’m not into sleeping in the woods. If the story says go sleep in the woods, it’s enough for me to lie down in the woods for five minutes and work off of that.

TVLINE | Assuming Monroe gets out of this, do you think this experience is the kind of thing that would fundamentally change him? He prides himself on having such tight control of what he thinks and feels.
Yeah, I think it will. It’s the kind of thing where, if anything, it solidifies my belief in the right way versus the wrong way to live. And I have a very strong sense of the right way and the wrong way to live; that’s something that Monroe and Rosalee share. 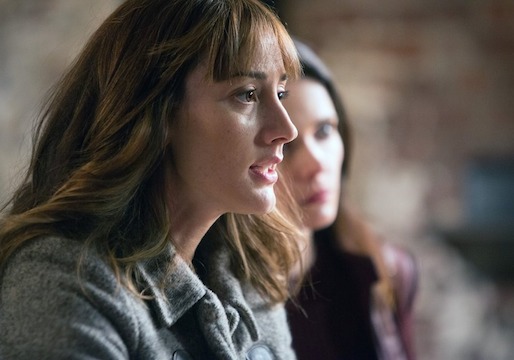 TVLINE | This story gave Bree Turner an opportunity to play a more angry, aggressive Rosalee.
That’s something that Bree was really excited about, getting to show the badass side of Rosalee. We’ve seen flashes of Monroe’s violent side, but not so much hers. I think it was fun for her to get to swim in that ocean of anger, frustration and sadness… She certainly gets to stretch into some ugly territory, which is fun for any actor.

TVLINE | In the episode that follows, Monroe and Rosalee finally go on their honeymoon. Will we see it on screen?
I think you see a piece of it, in a sort of funny way. But we didn’t go to, you know, Antigua. Unfortunately.

Press PLAY on the exclusive video below to watch Monroe give an impassioned denunciation of the tribunal (and a touching shout-out to Rosalee).