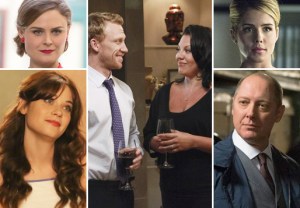 Question: Now that Bones has decided to incorporate Emily Deschanel’s pregnancy into the show, will we get to see Brennan in the early stages of her pregnancy this time? Or will there be another time jump? —Tiera
Ausiello: Sounds like you’ll get a ringside seat to that elusive first trimester, since exec producer Stephen Nathan tells me that Brennan and Booth will, a least initially, attempt to keep the pregnancy a secret from their co-workers.

Question: Do you have any scoop on Bones? —Cassidy
Ausiello: An early 2015 episode will find Cam’s man Arastoo “trapped in Iran as a political prisoner,” Nathan reveals. “The only way he can leave is to solve a particularly sensitive murder. And of course he can’t do it without help.”

Question: I know it’s early yet, but any Once Upon a Time scoop to get us through this hiatus? —Jenny
Ausiello: As Season 4 unfolds starting March 1, new flashbacks will highlight the Charmings, Ursula’s origin story, more of Captain Hook’s past and the tale of how Regina first met Maleficent. 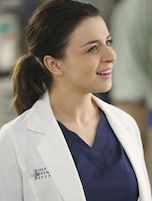 Question: Scoop Me! —Bob
Ausiello: I’m getting a distinct Grey’s Anatomy vibe from you, Robert. Look for Owen and Callie to encourage each other to get back in the dating scene in early 2015. I hear the former will test the waters with a certain female doc with the initials “AS.” Hint No. 2: She has substance abuse issues. Hint No. 3: She’s related to Derek. Hint No. 4: She’s pictured to the right. Hit the comments with your best guesses!

Question: I just read that Orange Is the New Black was cancelled! Say it ain’t so! —Jill
Ausiello: Back your nose away from the glue stick, Jill. OITNB will probably be around for at least another four seasons beyond its upcoming third. Speaking of which, after Suzanne was left sobbing in the wake of Vee’s disappearance, Uzo Aduba says we will find Suzanne in a “broken place” when Orange returns. “[Series creator] Jenji [Kohan] is playing with the idea of faith and belief. What is faith? What is it we choose to believe in?” Aduba shares. “And [those questions] are true for Suzanne, as well.”

Question: I’m dying to know whether the Jess/Nick ‘ship has sailed on New Girl, or if there is still a chance of them getting back together. I love the character of Ryan, but I love Jess and Nick! —Ganga
Ausiello: The ‘ship actually hit an iceberg and sank, this according to Jake Johnson. “Nick is really happy for Jess and Ryan, they’ve got a nice thing going,” shares the actor. “Nick and Jess are friends, and I think [the romantic relationship] is done. You can’t keep flipping back and forth, because the show needs an identity. They went back to just friends, and they’re happy with that. And I’m happy to do it.”

Question: Michael, you are way too funny. —Jackie
Ausiello: It’s a gift.

Question: I was wondering how, after Arrow‘s stunning midseason twist of “killing” Oliver Queen, Felicity would react. Felicity was clearly hurt when Oliver kept pushing her away, and now that he finally tells her he loves her — she was his last dying thought! — and now she’s lost him again! –Julie
Ausiello: I will just remind you that when Matt Mitovich last Q&A’d Emily Bett Rickards, she had just wrapped filming “a sad moment” for Episode 10 — aka the midseason opener, airing Jan. 21 — and it had left her “drained.” (Elsewhere on Team Arrow, Marc Guggenheim told us that in the same episode, David Ramsey “shot what I would describe as his most emotional scene…. David breaks your heart with his performance.” So, yeah. Kleenex.)

Question: Any scoop on Arrow? —Anita
Ausiello: We haven’t seen the last of Thea’s DJ-boytoy, played by Austin Butler. “Like a lot of our characters, there’s maybe a little bit more to him than meets the eye,” exec producer Greg Berlanti teases. And will her papa Malcolm Merlyn have a take on the new guy in his daughter’s life? Says Berlanti with a laugh: “It would be surprising if he didn’t.” 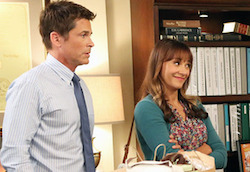 Question: Got any scoop on the final season of Parks and Rec? —Serena
Ausiello: The one-episode return of Rashida Jones and Rob Lowe will be “warm, happy and upbeat,” reports exec producer Mike Schur, who teases that viewers will get “some cool glimpses into what [Ann and Chris] have been up to in the years that they’ve been gone. It’s going to be a really nice thing for people to see them.” Bringing Jones back for the farewell season was among Schur’s top priorities. “The entire series is predicated on Ann Perkins coming to a small public forum and complaining about something in her neighborhood,” the EP reminds us. “That was literally the design of the show, and it just wouldn’t have felt right if we didn’t have Ann back in one episode, at least. I’m really happy that it all worked out.”

Question: In a recent episode of Forever, Jane Seymour played Abe’s twice-divorced wife — but Henry had never met her. How does the show explain that? —Angie
Ausiello: Easy, says star Ioan Gruffudd: It doesn’t. (At least, not yet.) “That’s a very good question!” he says, laughing. “It will be interesting to find out what that period of time was and why they were apart. Was it to protect Abe? Was it to protect the secret or something like that? It will be interesting.”

Question: Can you please give us some scoop on the new and final season of Justified (besides what has been reported in all the little short snippets lately)? —Harris Family
Ausiello: The final season premiere picks up with Raylan in, of all places, Mexico, where his U.S. Marshal’s badge curries him exactly zero favor. (But when has that ever stopped him from getting what he needs?) The episode also features a moment so abrupt and shocking, you will jump out of your seat.

Question: I need info on Scorpion. Namely, is Camille Guaty/“Megan” going to be pretty much a regular for the immediate future? —Justin
Ausiello: A show rep confirms that the Prison Break alumna is now in fact recurring on the freshman CBS drama. As such, you should see Walter and Sylvester’s confidante again sometime soon. 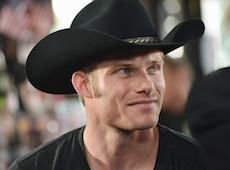 Question: When is Will going to come out on Nashville? It’s been long enough! —Ryan
Ausiello: Hallelujah, Nashville fans: Showrunner Dee Johnson says the closeted character “probably will be out” by the end of Season 3. However — and interestingly — she adds, “I don’t know whether it will be voluntary.”

Question: Sleepy Hollow. Ichabod. Abbie. Intel. Go! —Molly
Ausiello: An upcoming twist. The Witnesses’ “relationship in a position we’ve never seen before.” An “epic climax” with “ramifications for Season 3.” (All courtesy of showrunner Mark Goffman.) Intrigued yet? BONUS SCOOP: Ichabod’s aforementioned karaoke experience is coming up in Episode 14, and we’ll get not one but two scenes involving at least one Witness taking the stage.

Question: I know you guys reported it was unlikely that Red Band Society would be getting a second season, but is there at least a chance we will get some closure? —Estee
Ausiello: As EP Rina Mimoun told us last month, the final three episodes of the medical drama’s first season — which have yet to be scheduled by Fox — will provide “closure for a lot of the current teen storylines” while showing ways that the adult characters’ arcs could continue (on the off chance of a pickup announcement). Episode 11, meanwhile, will feature the return of Jes Macallan’s Ashley and the introduction of Leo’s family — including William Ragsdale (Herman’s Head) as the heartthrob’s dad. Plus, the sometimes-underutilized Dash will be getting a love interest, played by newcomer Jessica Lu. “We’re packing a lot into the last three episodes of the season,” says Mimoun. “I’ll tell you that.”

Question: Anything on The Blacklist? —Missi
Ausiello: Regarding that gigantic cliffhanger in November’s fall finale — How do Tom and Red know each other?! — series creator Jon Bokenkamp says that burning question will be answered. Eventually. “Tom clearly has some sort of past that Liz is not aware of, that involves Red,” the EP confirms. “We will continue to tell that story. We don’t dive right into it in the Super Bowl episode, but that does start to bubble up later in the back half of the season.” 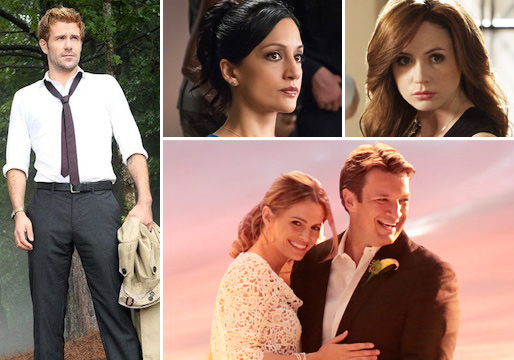