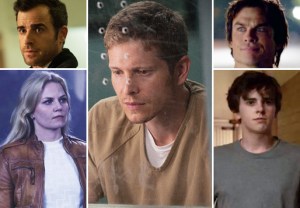 Question: Do you have any scoop on Castle Episode 8? —Jess
Ausiello: Titled “Kill Switch,” the episode revolves around a routine investigation that turns deadly when a gunman takes hostages on a subway car — including one of the 12th’s finest. BONUS SCOOP: Married with Children‘s Ted McGinley is set to guest-star in Episode 9’s Expendables riff as Brock Harmon, an aging, larger-than-life B-movie action vet (and the husband of the recently cast Krista Allen). The ep revolves around the murder of a Stallone-like movie star.

Question: Anything on The Leftovers? —Christopher
Ausiello: Good news: Damon Lindelof is a Kevin-Nora ‘shipper. Worrisome news: My favorite star-crossed lovers have their work cut out for them in Season 2. “The audience is rooting for them, and so are we,” Lindelof tells TVLine. “Both characters have a tremendous amount of damage, and that stuff isn’t immediately apparent when you’re first falling in love with someone. But once you’re together with them, you actually have to start the work, and they’re going to start engaging in it.”

Question: Can I get anything about Jim and Maggie of The Newsroom? A good scoop, maybe? It’s the last season, and they have to be together. Thank you. —Maria
Ausiello: Remember how Maggie was such a hot mess last season, you could practically warm your hands over her? That’s not quite the case at the beginning of Season 3, and there are several moments in the premiere where Jim notices. That said, Hallie is now a fixture in the ACN newsroom, so…

Question: On Once Upon a Time, is Emma going to help out Henry and Regina with Operation Mongoose? —Dee
Ausiello: Probably not until the 12-episode Frozen arc is over, at earliest. As Jennifer Morrison shared during our set visit, “I’m sure we’ll get around to it eventually, but that storyline right now is separate from ours [and] there’s only so much overlap that can happen before there’s just too much going on. But I’m sure that in the second half of the season, we’ll all have some kind of participation in that.”

Question: Any twists and turns coming up for the Charmings (apart from the baby) on OUAT? —Jenny
Ausiello: There’s a “pretty nasty” development coming, one with far-reaching consequences, teases Josh Dallas, who adds, “There’s something on its way that definitely affects everyone in Storybrooke — and the Charmings, for sure. It creates some weird things within their relationship. I can’t tell you any more.” No worries, JD. You’ve already told us more than enough.

Question: Thanks for the heads-up about Michael Urie appearing in the Nov. 12 Modern Family. Who’s he playing? —Dave
Ausiello: The Ugly Betty MVP will channel Gavin Sinclair, an entitled, influential fashion stylist with whom Haley interviews for a job. So, he’s basically playing Wilhelmina Slater, and the spectacular photo below pretty much proves it. 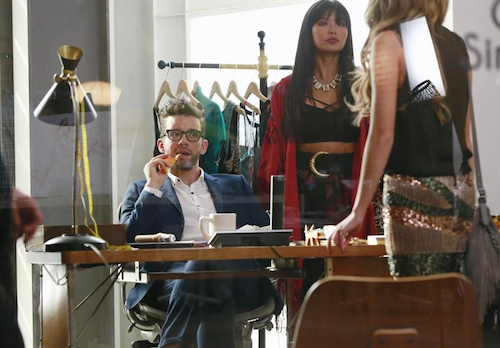 Question: I figure if anyone knows what Sleepy Hollow‘s Ichabod is going to sing at karaoke, it’ll be you. —Erin
Ausiello: You’re right, Erin. I know exactly what Crane’s going to cue up when the Fox drama has him and Abbie hit a karaoke bar, but I’ve been sworn to secrecy. However, I can tell you that he commits to the performance, and Abbie — like a good pal — wholeheartedly cheers her fellow Witness on.

Question: Is Greer really going through with her wedding to Castleroy on Reign? They can’t do that to Leith! — Ashleigh
Ausiello: Oh they can, Ashleigh… but will they? We do know a few things for sure: Greer will be slipping into a wedding dress this Thursday, and her former lover will have a front-row seat to the action. “In some capacity, I will be at Greer’s wedding,” Jonathan Keltz (aka Leith) teases. But he also urges us not to jump to conclusions, saying that, “Just because you saw a picture of Greer in a wedding dress, that doesn’t mean you know what’s going to happen.” Do we think Leith will speak up?

Question: White Collar’s Willie Garson tweeted a photo from the Hawaii Five-0 set. Any details on what he’s up to? —Claire
Ausiello: Stop me if this sounds “familiar” to White Collar fans, but Garson is guest-starring in Episode 11 — the same one as Lost alum Rebecca Mader — as Blume, a highly respected art appraiser with (ahem) black market connections. And as one might infer from the tweeted photo, Blume is quite smitten with Kono. 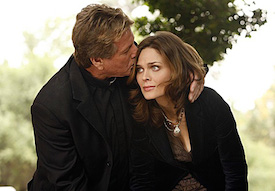 Question: Any chance you have some Bones scoop that you have yet to share? —Rachel
Ausiello: The show will take a breather after No. 200 with a run of quieter, more traditional Bones installments. “The 200th episode is a great big, black, sucking hole that all the effort has gone into,” notes series creator Hart Hanson. “So the show is somewhat smaller for at least three or four episodes. We go back to our normal show after the 200th, for a while.”

Question: I would love any spoilers you have about Arrow, specifically Laurel-Oliver. —Alannah
Ausiello: If I’m hearing you correctly, you’d like some “Olicity” scoop. (Kidding! I made a funny!) Oliver will soon find out that Laurel is training with Ted Grant, much to his dismay. “The dynamic has been very adversarial” between the former lovers, Stephen Amell shares. “What she wants and what he’s prepared to reciprocate are at odds with one another, and that carries through the fall.” There’s also the fact that he’s not thrilled that she’s keeping Sara’s death hidden from Captain Lance. However, “it is Laurel’s decision, it is not Oliver’s,” Amell concedes. “And he’s not gonna step on that. He has the ability to disagree without taking matters into his own hands.”

Question: Any information on The 100? Maybe about when the reunion between The Ark adults and the remaining 100 (48) will happen? —Isabella
Ausiello: When the two groups do eventually reunite, the adults will need to listen to the kids if they want to stay alive. “We actually have a lot of good information that can help with the survival of our people,” Marie Avgeropoulos explains. “We know how this has been going and what dangers lie on the other sides of our gates.” And if/when they don’t heed The 100’s advice, the Ark survivors will “get what’s coming and they’ll learn the hard way, too. You’ll see a lot of that in Season 2.”

Question: Do you please please have some scoop on Bamon/Stelena or Klaroline from The Vampire Diaries? —Lisa
Ausiello: Eeny, meeny, miny… Bamon! While the two will always get on each other’s nerves, this Thursday’s episode features a lovely — albeit fleeting — moment between Bonnie and Damon that suggests they may not hate each other as much as they claim to.

Question: Any scoop on Vampire Diaries? Preferably Caroline related? — Melissa
Ausiello: Like most episodes, this week’s TVD will be an emotional roller coaster for Ms. Forbes, who begins the episode in her dorm room with Stefan… and in nothing but a towel! What happens next will send Caroline on a day-long journey that ends with her literally gasping for air. 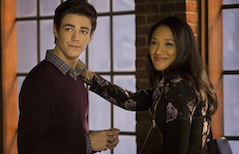 Question: I’ll go as a Smurf or you for Halloween if you give me scoop on one of my DC faves on television now. What can you tell me about Gotham, The Flash, or Arrow? —Anand
Ausiello: Flash it is! Iris’ obsession with the Red Streak is “definitely a point of tension” in her relationship with Eddie, Rick Cosnett says. “What’s happening with that, how she’s investigating it, how he reacts to it and how it affects their dynamic is quite a big point of contention.” Another issue: The detective is starting to clue into Barry’s feelings for his girlfriend. “Eddie starts to get the impression that there is more than meets the eye, at least with Barry, and he will confront Iris about that,” Candice Patton teases. (Anand: I want photographic evidence that you held up your end of the bargain or you will be blocked from AA for life.)

Question: Please tell me Cary isn’t going back to jail on The Good Wife. I’m not a fan of prolonged prison storylines, even though I’m sure the Kings would no doubt find a way to make it compelling. —Kim
Ausiello: I would tell you that Cary isn’t headed back to the pokey if I could. But I can’t. Partly because I don’t actually know, and also because the show is currently casting a role that leads me to believe a long jail sentence may indeed be in his future. The character is Tim, and he’s a “prison consultant” who is hired to give Cary a day-long session on how to survive in prison (including physical and psychological pointers). Tim’s an ex-convict so he would know.

Question: TVLine.com is the first site I check in the morning. You are my spoiler superhero, so I need you to rescue me. I’m desperate for a big juicy Sam-centric Supernatural spoiler. —Kira
Ausiello: Can I give you a mildly-juicy Cas tidbit instead? Crowley may have replenished his grace, but the angel still has plenty of problems. “He’s going to be at something of a crossroads,” executive producer Jeremy Carver previews, “deciding what’s most important to him and what’s most important about the mission that he was sent here to do — and what that’s come to mean these days. It’s going to lead him on a pretty personal, pretty powerful journey.”

Question: Any Bates Motel scoop please? The wait is killing us. —Sara
Ausiello: Season 3 will be “very much about the characters trying to figure out right and wrong, walking through that kind of murky terrain,” previews exec producer Kerry Ehrin, adding, “Norman definitely is getting to a point where he is more torn between two parts of him, and in a lot of ways, it’s about the battle for his soul [and] who he is.” Speaking of Bates Season 3, did you see this? And this? And this?