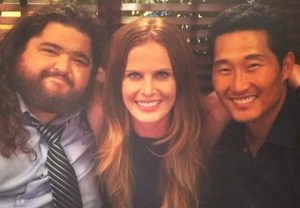 Rebecca Mader is going back to the island.

The Lost vet is the latest alum from the beloved ABC drama to land a gig on CBS’ Hawaii Five-0.

TVLine has confirmed that Lost’s erstwhile Charlotte will guest-star in an upcoming episode of the CBS procedural as Nicole, the dynamic, smart and edgy recovery specialist for a big insurance company. As she works closely with McGarrett on a case, Steve constantly second-guesses her motives, yet is genuinely impressed and amused by her various ploys.

(Rest assured, though, Mader will also share screen time with Lost pals Jorge Garcia and Daniel Dae Kim, whom she tweeted a photo with while on set.)

Mader’s more recent TV credits include Once Upon a Time and an upcoming turn on CBS’ Blue Bloods.

* The Young and the Restless‘ Judith Chapman will bring her matriarch Gloria Fisher to sister soap The Bold and the Beautiful during the Nov. 20 episode, TV Guide Magazine reports.

* Max Brown (Beauty and the Beast) will guest-star on Sleepy Hollow as “a powerful and mysterious new ally known, at first, only as Orion—a charismatic soldier who possesses a game-changing weapon,” per EW.com.

* ABC is reviving Barbara Walters Presents: The 10 Most Fascinating People with a two-hour special airing Dec. 14. The first honorees to be revealed are Oprah Winfrey, Neil Patrick Harris, Chelsea Handler and Scarlett Johansson.

* Roma Downey and Mark Burnett will produce a six-part series for TLC about people who claim they’ve experienced divine intervention. The actress will also host.