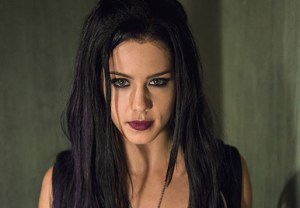 Tonight at 8/7, The CW’s Arrow will reveal “The Secret Origin of Felicity Smoak,” as the superhero drama delves into the quippy computer whiz’s complicated past.

TVLine grabbed a few minutes this week with Emily Bett Rickards (right after she had filmed a “draining,” “sad moment” for Felicity, hmm) to preview this long-awaited deep-dive, reflect on the “Olicity” break-up and tease the big Arrow/Flash crossover event.

TVLINE | Who do you think anticipated this episode more, you or your fans?
Oh, me. Me. Yeah. I mean, the fans of the show have been anticipating it more since I’ve filmed it, but I’ve been craving it since Day 1, so I was really, really excited.

TVLINE | It must be a great tool as an actress, to have that extra information to work with.
You get to have that information, but being able to actually work that information and rehearse and act with other people, the other characters… You fall in love with it. That’s the joy of it, and that’s why we “crazy people” do what we do!

TVLINE | What most surprised you about Felicity’s past?
Her deep turmoil. I always thought that she was this light person that was now coming into this world of trouble. I knew that she had heartache in her life, from different areas, but now I respect it more. 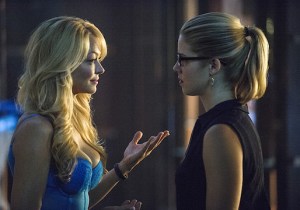 Now that I know and have felt it…. I just love her so much, and I was very sad to know how sad she had been.

TVLINE | Felicity previously hadn’t spoken highly of her mother. When Donna (played by NYPD Blue‘s Charlotte Ross) shows up, is there some sort of lingering tension or a grudge between them…?
Not a grudge. She’s quite embarrassed by her mother, because she is this whirlwind opposite of whom Felicity is. Within the episode, getting to see her mother again, she learns how to accept her, and I think that’s very important.

TVLINE | Are there any references to Felicity’s mysterious father during their exchanges?
No. A lot of people are wanting that but… [Reconsidering her answer] Oh… Grrrr…. Sort of…? There’s the weight of how that family dynamic would have been, but you guys don’t get any, you know, “Daddy gold.” [Laughs]

TVLINE | Outside of Felicity, does anybody have a specific reaction to her mother?
Well, she does get introduced to people in Felicity’s present day life, and those people…. Donna presents herself as likeable, which is interesting for Felicity, because she doesn’t think she likes her mother. She loves her mother, but she’s like, “Oh god, this is my mother.” 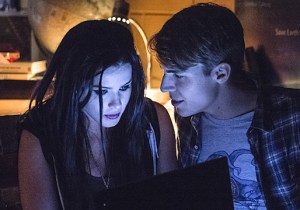 But yeah, there are characters that smile when they meet her.

TVLINE | What can you tell us about what Nolan Funk (Glee) is doing in the episode, as Felicity’s ex?
We get to see him in his college years, and we get to see Felicity in love. We get to see young college love and that whole game.

TVLINE | Young brunette love. Have you ever been so brunette in your life?
I have been a brunette! I went to an acting school for four months and I had very, very dark air. My mom’s natural hair color is black, but she’s sort of a blonde-y redhead now so… no one believes me!

TVLINE | In one of the photos 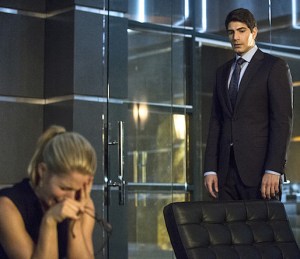 from this episode, Felicity looks very distraught, Ray Palmer is nearby…. Will there be some bonding? Will they share a real moment, finally?
That’s going to be expected to come, and yes, he’s going to be sort of a transparency in her life, perhaps be her polygraph, as she is for everybody else, which I find very refreshing for her.

TVLINE | In your mind, why did Felicity go to Central City last week?
You know what, I think that time and space was needed, from Starling City, from Oliver, from all this “stuff.”

TVLINE | But was she also looking to suss out the Barry situation?
That was definitely part of it, but I don’t believe that she would have gone if things hadn’t reached this point in Starling City. The death of Sara, the drama with Oliver…. Even just having a break to go somewhere with more daylight! [Laughs]

TVLINE | Speaking of Oliver, in the season premiere you had that terrific “break-up” scene with Stephen 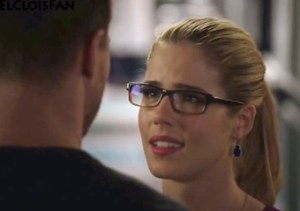 [Amell]. How satisfying was that for you as an actor?
That was one of the best moments. As an actor, you’re just like, “Yes. This is what I live for. This destruction, this release.” It’s therapeutic in a way. I really like working with those scenes where you get to take moments, because we work fast all the time. Having the chance to take a moment in a scene is very appreciated by me as an actor.

TVLINE | What can we expect from the two-night The Flash/Arrow crossover event [airing Dec. 2 and 3]?
The shows are sort of sharing a villain, so we are trying to track down someone that leads us to both cities, and both teams have to work together. There is danger, and there are new dynamics. I mean, Felicity gets to work with Caitlin, which is always very, very fun. Two women of that intelligence caliber working in what’s still a “man’s world” is very satisfying as an actor, and as a friend [of Danielle Panabaker].