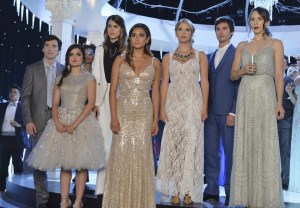 Christmas comes early to Rosewood on Tuesday’s Pretty Little Liars special (ABC Family, 8/7c), but as TVLine learned from Lucy Hale, Shay Mitchell and Tyler Blackburn, not everyone will be of good cheer.

I caught up with the stars for a peek into their ships’ post-Christmas futures, and I’m legally obligated to warn you: it ain’t all pretty.

EZRIA | The ice ball wouldn’t be a true Rosewood dance with a little drama, so as Hale explained, “[The girls] go there with the intention of hopefully leading us to A.” And even though Alison introduces the girls to her “new army,” Hale told us never to rule out a reunion between Ali and her old crew. (“She’s still like their sister — their really evil sister.”) Hale also shared this message with all the Ezria shippers out there: “It’s probably the last time you’ll see them in a really good spot for a while, so hopefully the fans will cherish this episode.” Yikes!

PAILY | Mitchell confirmed what we’ve heard about Paily’s rocky holiday — rather than call them girlfriends, Mitchell said they have a “special relationship” — but the situation might not end as terribly as fans are fearing. “No matter how up-and-down their relationship goes, they will always have a special connection,” she assured us. Also in full effect Tuesday night: Emily’s unadulterated love of the holiday, in spite of whatever A has planned for the girls. “I don’t think Emily will ever not like Christmas,” Mitchell said, “but will this be a Christmas she’ll always remember? One-hundred percent!”

HALEB | If you’ve been following our coverage, you know we’re hot on the trail of these alleged “Christmas boxers,” and now, Blackburn has come to our aid. “The show is so much about the girls being beautiful, but the guys can provide a little eye candy too, I guess,” he said. “It’s a pretty quick scene, but it’s fun and it’s funny. We did a lot of sit-ups [before filming].” Haleb fans will also be happy to know the couple gets lots of romantic screen time on Tuesday. “There’s a nice, kind of sad-yet-sweet scene by the fire,” Blackburn said. “Plus, we get to do some slow dancing at the ice ball.”

Which couple are you most worried about during tonight’s Christmas special? Drop a comment with your thoughts below.