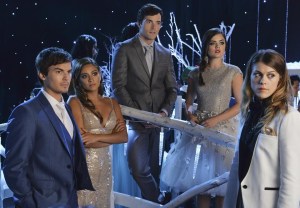 The Pretty Little Liars Christmas special is still four days away, but because waiting is the worst, TVLine has some scoop to stuff into your stockings until then.

Below, executive producer Marlene King gives us the dirty details on Tuesday’s holiday extravaganza (ABC Family, 8/7c) — including which of Rosewood’s resident hotties will be stripping down to his skivvies. (Spoiler alert: It might be more than one.)

TVLINE | Is it like Sisterhood of the Traveling Pants, where they just pass the boxers around?
[Laughs] No! I will say this: There’s more than one pair of Santa boxers.

TVLINE | Yeah, seriously. OK, so do we get to see Christmas at the Fitzgerald house?
We hear about a lavish Fitzgerald Christmas, and this whole episode is certainly is a lavish Christmas in so many ways. There’s a lushness to it, and such beautiful cinematography. It’s by far the most cinematic episode we’ve ever done. It’s gorgeous all around.

TVLINE | I also love that Mona leaves something behind in her will for Hanna. Like, what normal teenage girl even has a will?
I know, right? She was thinking ahead, though, and Mona knew there was a chance she would meet her demise. She had to plan accordingly.

TVLINE | Any reason why Hanna is the recipient of Mona’s “gift”?
Well, even in their darkest moments, Hanna and Mona share a special bond. They’ve gone through so much together, and I think Hanna still has very sympathetic feelings for Mona. It makes sense that she’d be the one person Mona would reach out to.

TVLINE | I feel like it might help clear Spencer’s name. Will that murder charge go away anytime soon?
It’s not completely wrapped up by the Christmas episode, but it meets its completion early on in 5B.

TVLINE | This show now has at least two more seasons. Do you know how it all will end?
We have a roadmap that takes [the girls] all the way to the end of Season 7, the major milestones. It’s exciting to fill in the blanks along the way as they meet different characters. We’re open to flexibility, but in terms of where they end up in the show, we know that.

PLL fans, any guess as to which guys end up in those aforementioned Santa boxers? And what gift could Mona have for Hanna? Drop a comment with your thoughts and theories below.