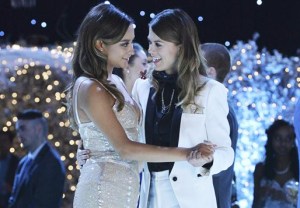 Pretty Little Liars‘ Emily and Paige haven’t always had the most solid relationship, and it sounds like Tuesday’s Christmas episode (ABC Family, 8/7c) will only complicate their love story even further.

“Their relationship takes a few turns during the Christmas episode,” executive producer Marlene King tells TVLine. “There’s a lot that happens with them. It’ll be interesting to see how fans respond to their journey.”

As always, King remains mum about what such “turns” might entail, but something tells me both halves of Paily will emerge from the holiday special relatively unscathed. After all, King tells TVLine that Spencer, Hanna and Alison — with a dash of Toby — will be the individuals challenged most next week.

Additionally, the photos from Tuesday’s episode show Emily and Paige in bright spirits, holding hands and dancing together. So what “turns” could possibly befall them — and why do I get the feeling “A” will have something to do with them?

Drop a comment below with your take on the current state of Paily. Are you rooting for the couple, or is it time to let that ship sail into the sunset?