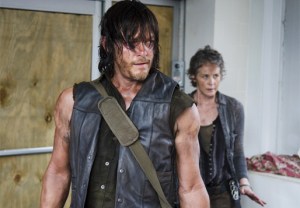 RELATED Walking Dead Midseason Finale Post Mortem: [Spoiler] Sounds Off on Killer Twist — ‘I Did Not See It Coming’

“In the letter column of the comic book that I do, I mentioned that there was a possibility early on about making Daryl Dixon’s character gay,” Kirkman explained. “I just wanted to clarify that the possibility is there and that I would have been fine with it, the network would have been fine with it — but we ultimately didn’t do that. I can make it official: Daryl Dixon is straight.”

Daryl’s sexuality has long been a source of speculation for fans, and when TVLine spoke with Kirkman in August, he made no attempt to quell the rumors.

“We’re not holding back information on Daryl’s sexuality as any sort of big reveal,” Kirkman told us. “The fact that there’s still a question as to what Daryl’s orientation is in Season 5 absolutely speaks to Daryl’s character; he is a very guarded, very closed-off individual in a lot of ways.”

Daryl’s now-confirmed heterosexuality aside, Kirkman also revealed on Talking Dead that a “prominent” gay character from the comic books will appear in the second half of the show’s fifth season. He had previously teased said character’s arrival during an interview with TVLine.

So, which gay character is making the leap from page to screen? Our money’s on Aaron, a resident of the Alexandria Safe-Zone who becomes a powerful ally for Rick and his fellow survivors.

What’s your take on Daryl’s sexuality? And which gay character do you predict will soon be fighting alongside the survivors? Drop a comment with your thoughts and theories below.