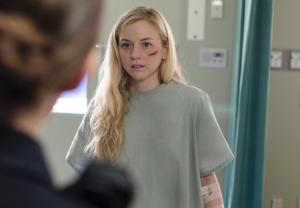 Warning: The following Q&A contains major spoilers from Sunday’s Walking Dead. Proceed at your own risk.

Well, Rick’s plan worked: Both Carol and Beth were “discharged” from Grady Memorial in The Walking Dead‘s midseason finale Sunday.

But only one of the women — professional death-cheater Carol — left the hospital with a pulse.

Sadly, Beth — played by series regular Emily Kinney — was shot to death by the hospital’s self-appointed dictator Dawn before she made it out of the building. Daryl, in turn, whacked Beth’s murderer in retaliation.

Below, an emotional Kinney — who got choked up several times during our exclusive chat — reveals why she wasn’t ready to say goodbye to her alter ego, speculates on what could’ve been between Beth and Daryl and answers the question on the minds of many fans: Did Maggie forget she had a sister?!

TVLINE | How long have you known that Beth was getting killed off?
Since late August. I found out the day the script [for the episode] came out.

TVLINE | What was your initial reaction?
I was very sad.

TVLINE | Did you race to read the script right away? Or did you put it off?
[Fighting back tears] I didn’t really feel like reading it. Also, the next day, I still had all of [Episode 5.07] to shoot. All of the Beth scenes you saw last week were done in two days of shooting. [Crying] So I wasn’t anxious to read the next script…

TVLINE | Was it tough to have to shoot all of those scenes right after learning you would be leaving in next episode?
[Crying] Yes.

TVLINE | Did you reach out to your co-stars for emotional support?
I think the original plan was for everyone to get a call [before they read it in the script]. I know when Scott Wilson was killed off [in Season 4], everyone was called [ahead of time]. And I think Scott Gimple originally [planned to do] that because he had times set up to talk to everyone that day. [But] I know not everyone got called, because some people called me the next morning when they read the script. Like, Norman Reedus and Andy [Lincoln] didn’t get any kind of call or anything like that. [Editor’s note: A source close to the show maintains that Gimple, on set in Atlanta, contacted all cast members either in person or via phone within hours of his meeting with Kinney, well before the script was distributed.]

TVLINE | Was it a comfort to have that support?
Yes.

TVLINE | When you finally did read the script, what was your reaction?
I don’t really remember. At the time I had to deal with all of the logistics, like figuring out what to do with my place. [Crying] I’ve basically lived on and off in Atlanta for four years.

TVLINE | Were you satisfied with how Beth went out?
I think the writing throughout has been great, but I wasn’t ready for it to be over. I think the Beth character, in particular… more could’ve been done with a teenager growing up [in that world]. I did not see it coming at all, especially this season. It’s weird, because I would’ve been OK with [this happening] in the second season or the third season, when I was like, “Oh, maybe this character is coming to a close. What else is there to do with her?” But now I feel differently… I feel like there was still so much more to [explore.], like, what could have happened with Daryl?

TVLINE | Did Scott offer an explanation?
He didn’t, really. I think the whole point is there is no rhyme or reason [to the deaths on the show]. It’s like real-life. Why does that person [die] as opposed to other people? We really don’t quite know why.

TVLINE | Did Daryl’s act of retaliation — killing Dawn after she killed you — warm your heart a little bit?
[Laughs] I don’t know…

TVLINE | Fans have been buzzing about the Daryl-Beth relationship ever since they had that big episode last season. What do you make of their dynamic? Romantic? Brother-sisterly?
They never really told us what it was supposed to be… I think it was a situation where they were getting to know each other. First, they were just trying to get along at all, because I don’t think that they saw each other’s point of view very well. And then as the story went along they maybe became friends, and I do think that it started to sort of go, “Oh, what more could this be? Could it keep going into something else?”

TVLINE | Beth came off as rather noble and almost heroic in this final arc. Was that of some comfort to you, the fact that she went out on such a high note?
[Crying] Yeah. I do feel like she grew up a lot. I do think that she always had it in her. Maybe it wasn’t something the audience could read, but I’d like to think this was a part of her from the beginning. She always had a fight in her.

TVLINE | She certainly wasn’t afraid to stand up to Dawn.
She started to become fearless, like, “I could die at any moment! Whatever!” She would rather be the person she wants to be, strong and fighting for herself, then play the game. She didn’t have anything to lose.

TVLINE | Some fans are wondering why Maggie hasn’t expressed much concern about the whereabouts of her possibly-alive sister prior to tonight’s episode. What’s your theory about that?
It’s a world where they’re losing people a lot. And if you’re going to survive, you can’t sit around mourning for very long. And just because we don’t see those scenes, doesn’t mean those are things that Maggie isn’t going through. You didn’t see a lot of Beth in Season 2 or Season 3, but I was imagining all along what she was feeling and thinking. So just because we don’t see Maggie being upset about where Beth is, that doesn’t mean it’s not on her mind.

TVLINE | What was it like shooting your death scene? Emotional?
Yeah. It was a long day.

TVLINE | Did you have a farewell dinner like the other killed-off regulars did before you?
[Fighting back tears] Yeah, we had a party.

TVLINE | Ten years from now, which castmembers do you think you’ll still be in touch with?
Norman and Lauren [Cohan]. And Scott Wilson. [Crying] And Steven [Yeun].

TVLINE | Do you have a particular fond memory from the past four-plus years?
There’s a lot. [Crying] I can’t pick one.