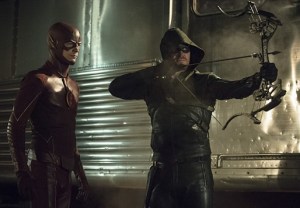 The CW’s first major crossover between Arrow and The Flash has it all: epic fight sequences, big secrets, not one but two worthy villains and Felicity Smoak in a PG-13 situation.

Yes, we’ll explain the 911-level emergency plaguing everyone’s favorite IT girl in just a moment. But first, the cast and executive producers preview the strange and delightful interactions between the shows’ crimefighting teams, the dangerous enemy putting someone’s beloved in jeopardy and the worst-named villain ever.

Oh, and star Stephen Amell and the creators also weigh in on a not-so-little Arrow surprise that happens on The Flash (airing Tuesday at 8/7c).

TEAM SPIRIT | The Flash and Arrow camps helping each other out – and at times, conflicting over their differing tactics – makes way for some unexpected exchanges. “I have a really interesting interaction with Dr. Wells,” Amell teases. “And it’s not so much interesting for what we talk about. It’s more interesting for what I take away from it.” Even “Felicity’s 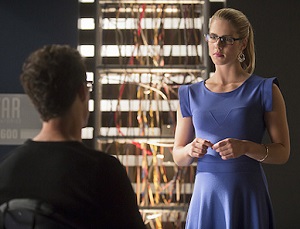 hairs stick up a little bit” during a scene with the mysterious scientist, Emily Bett Rickards says. “But it’s taken away so quickly by another urgent matter that it almost gets pushed under the rug.”

On the other end of the spectrum, there are plenty of laughs courtesy of deadpan reactions from Diggle when he meets The Flash. “When Barry arrives for the first time in his suit, and Diggle sees that, honestly, it’s just like my favorite moment in both episodes,” Grant Gustin says. His co-star Carlos Valdes also singles out his scenes with David Ramsey and Colton Haynes as being among his standouts – for their inability to keep a straight face. But who can blame him when there’s so much for Cisco to get excited about upon meeting Team Arrow and then seeing the lair? “He spends so much time geeking out about Barry being a part of his life and becoming The Flash and getting to be a part of Team Flash,” Valdes shares. “And now you’re adding another component to the mix, which is, ‘Now we get to work with Arrow?!’ He might explode. He might spontaneously combust.” And does he have a signature Cisco reaction when he finds out Oliver is the masked vigilante? “Yes, he does. I’m not going to give that away,” Valdes replies with a laugh. 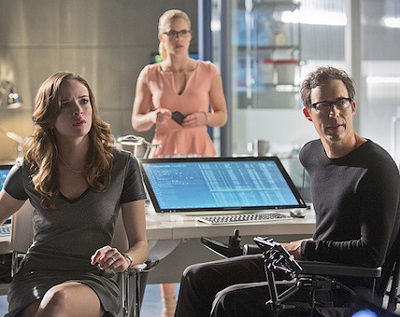 Meanwhile, Caitlin is, at least initially, less welcoming of Oliver & Co. “She’s a little skeptical at first, that first moment where there’s so many people at S.T.A.R. Labs,” Danielle Panabaker describes. “Caitlin’s worked very hard to protect Barry and make sure nothing happens to him… That’s definitely a challenge for her. She’s skeptical, but happy.”

BAD GUY #1 | “What I liked is we picked villains that reflect the tone and sensibility of both shows and then used those villains to put our heroes through their paces,” executive producer Marc Guggenheim shares. The action kicks off in Central City with The Rainbow Raider (played by Paul Anthony), “which is actually one of the worst names of a comic book villain ever,” executive producer Andrew Kreisberg says with a laugh. “Usually, Cisco coins the names for the bad guys, and this episode, it’s actually Caitlin, because somebody who’s not quite so nerd-cool would come up with a silly name like that.” But don’t let the moniker fool you – The Rainbow Raider is a worthy foe who “has the ability to engender anger and hatred in somebody.” And thanks to his special powers, he manages to turn The Flash against the Arrow, leading to an huge blowout fight. However, “the tension doesn’t really carry over” into Wednesday night’s Arrow installment (8/7c on The CW), Gustin reveals.

The bad vibes could be revisited “down the road,” he speculates, “because some things are said that were clearly real things. For now – guys kind of move past stuff like that. But who knows?” 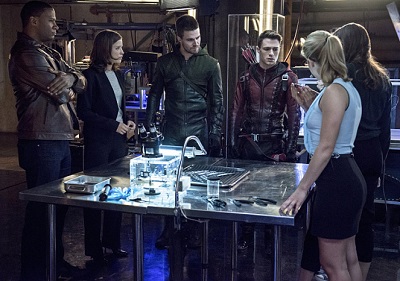 BAD GUY #2 | The second half of the spectacle features Boomerang (Spartacus’ Nick Tarabay), a well-known foe of the speedster. “It makes a lot of sense because he’s not a metahuman character even though he fights The Flash,” Guggenheim says. “Having one of the Flash’s only non-metahuman villains appear on Arrow first, it’s pretty cool.” But some of the Starling City crew might disagree, given the character’s troubled history with a certain loved one. “He’s a former member of the Suicide Squad who’s out for revenge,” Kreisberg explains. “He’s targeting Dig’s [ex-wife] Lyla, so it’s up to The Flash and Arrow to keep her safe.” Adds Amell: “Conveniently, [Boomerang] sets up a scenario that if it was just Flash or if it was just Arrow, we couldn’t solve it. But the fact that we are this big team together gives us an opportunity to hopefully thwart [him].” That’s good news for Diggle, who’s not handling the life-threatening situation well and “may end up having to depend on Flash a lot quicker than he thought,” David Ramsey says.

WHAT THE SHIRT? | If you saw a foreign promo for the crossover online, you may have spotted Felicity with Barry in S.T.A.R. Labs — and missing something very crucial: her blouse! “Yes, there is an emergency and I have to take my shirt off,” Rickards explains, noting there’s a moment where her quippy character is put in genuine danger.

A QUEEN SECRET | Much has been said about the big Arrow moment that will be revealed in the Flash hour of the crossover. But since viewers will be privy to the information before Oliver himself, the fallout will have to wait for another day. “Obviously, the ripples will really hit when Oliver learns what the audience learns,” Guggenheim explains, while Amell assures, “It’s not the type of thing that we’re going to tease and then not deliver on.”

Excited about the Flash/Arrow crossover? Which character interactions are you most excited about? Sound off below and check out a brand new trailer for the event, plus a sneak peek of Captain Cold and Heat Wave!