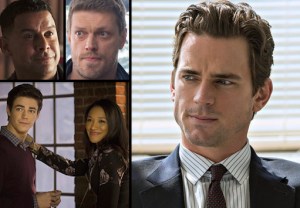 Who on Castle might have a very merry Christmas? How will White Collar say goodbye? Is a Haven hook-up ahead? What happens to the Arrow on The Flash? Is a Beauty-ful family expanding? Read on for answers to those questions plus teases from other shows.

I saw on Twitter that you got the White Collar final season premiere. Anything you could share? — Katie H.
I can share that the final-season storyline, as laid out in the first episode (airing Nov. 6), is pretty damn nifty – a specific, final gambit with enormous stakes all involved, including on the personal front. The highly unexpected return of Ross McCall’s Keller (grrr) only adds to the mercuric, unpredictable nature of this ambitious con. Also: Great fun in Episode 2, where Peter and Neal must pose as father and son; damn if Tim DeKay doesn’t sell it. (That said, someone should have reminded me that plowing through the first two episodes would mean I’m already one-third through the farewell run!)

Anything about Elizabeth Burke on White Collar? –Wahiba
She is still very much D.C.-bound as the season opens, with her and Peter dedicated to managing the medium-distance relationship. Until something rather unanticipated happens.

Anything about Castle Episode 10? We know that is Christmas-related and is written by Chad and Dara Creasey, but do you have other news? –Nancy
A source tells me that in that episode, against the backdrop of the most wonderful time of the year, Esposito and Lanie will “navigate a defining moment in their relationship.” I hear goosebumps forming out there!

Will The Flash‘s Iris Allen hail from the 31st Century like she does in the comic books? –Michael
I am unable to speak to that specifically, but series lead Grant Gustin confirmed during our visit to the set, “Time travel will be a part of the show” — and seemingly at Barry’s own, inadvertent doing. “The first time it happens, I think it’s an accident, and that’s going to be fun to play with,” he said. “I’m looking forward to that.”

Do you have anything that is coming up for The Flash? – Andy
If you fear that Dr. Wells learned nothing from the Ghostbusters, you would be correct. “There will be more characters [going] into the metahuman prison” located within S.T.A.R. Labs, Gustin says, “and there’s a possibility things could go wrong with that.” Sigh, no one listens to William Atherton.

Do you have any scoop on either The Vampire Diaries or Haven? –lilslim
Haven it is! If this photo that I shared with you recently didn’t already tip you off, let me spell it out for you: Laura Mennell’s CDC scientist (debuting on Halloween) will have a bit of a romance with Dwight. But any sparks might be doused should Dwight discover a secret the doc is hiding…. (Reminder: Haven now airs Fridays at 7/6c.)

How will The Flash play into 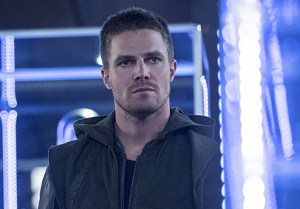 the Arrow plot and vice versa? —Lindsay
If you’re talking about the Episodes 8, two-night crossover, Stephen Amell shared that one of the biggest moments for the Arrow actually occurs during the Flash hour. The nature of that scene, however, remains a well-guarded secret. “I can’t tell you anything about it other than it relates to Central City — and when I saw it in the Flash script, it ended up being actually quite gratifying,” he shared. “[Director of photography] Glen Winter said it was his favorite thing I’ve been involved in so far on the show.”

Once Upon a Time‘s Regina and Robin are said to be soul mates, and as we know soul mates tend to have a deep connection. Will that connection be explored? –Ana
First, Regina needs to recover from the thief’s declaration of love, which despite the smile she met it with is perhaps the last thing she needed to hear. “It complicates everything,” Lana Parrilla notes. “It’s easy if he says, ‘I’m an honorable man. I have to stay with my wife.’ As hard as that is to hear, it’s also what she admires about him. But when he says, ‘I love you and I know I should be doing the right thing but my heart lies elsewhere,’ even though Mary Margaret and Henry say, ‘This is something to celebrate,’ Regina doesn’t see it that way. She finds it harder to walk away from him knowing what he feels about her.” 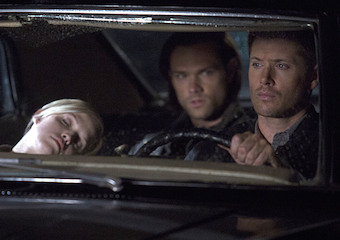 can you tell me what’s next? –Mae
The next episode, “Paper Moon,” brings back Kate the werewolf for a specific, thematic reason, says writer Adam Glass. “Her experience, as great Monster of the Week episodes always do, reflects basically where the boys are at emotionally right now. So it will be them looking at themselves in the mirror through Kate and what’s happening in her experience.” Explaining the decision to revisit the lady lycanthrope, Glass says that when viewers last saw Kate, in Season 8’s “Bitten,” “It was like The Incredible Hulk, which was pretty cool, as she’s walking off. And I think everybody in the writers room was like, ‘What happened to Kate? What is her next move?’ So the idea of bringing her back is just tremendous.”

Earlier in the year, it was said that Spike TV was developing a scripted series based on Stephen Frey’s financial world-themed thrillers. The reports were that Julian McMahon (Nip/Tuck) was going to be an executive producer and possibly star of it. Any word on its status? –Linda
A Spike TV spokesperson confirms that said series is still in development.

Any new spoilers for Beauty and the Beast Episode 6? –Stephanie
For that episode, titled “Chasing Ghosts,” the CW series is seeking Asian actresses in their 40s/50s to play Cat’s two aunts. Lily is the no-nonsense one out to get the 411 on her niece’s rugged roommate Vincent, while Claire is the more sensitive “family peacekeeper.”