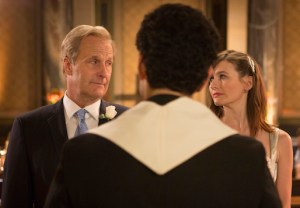 If you’d thought that maybe The Newsroom wouldn’t actually show us Will and Mac’s decades-in-the-making wedding, well, you were wrong.

But if it’s any comfort, you’re in very good company: Will, too, is spectacularly incorrect in this week’s episode. “Too big to jail,” Mr. McAvoy? The United States government begs to differ.

Elsewhere, the Jim and Maggie Show slowly cranks back into gear. Still pretty indifferent on that one, but it’s for different reasons than I had last season. (We’ll get into it in a minute.)

Let’s take a look at what happens in “Contempt.”

WILL IN HOT WATER | We pick up at the White House Correspondents’ Association dinner party immediately after Will has been served with the federal subpoena. Rebecca tucks the offending piece of paper into her cleavage (I reiterate: I love this woman) as Charlie asks everyone to keep it hush-hush.

Just then, everyone’s phones go off: Carnivore — AKA Hallie’s new employer — published a story about Will being at the dinner despite decrying it the year before. The tale of Will’s hypocrisy is spreading throughout the Internet like a hilariously captioned cat photo, but all Mac cares about is the fact that her future husband may soon be some inmate’s wife. “You’ve been wrong about everything, every step of the way,” she says, super worried, but Will assures her once more that the feds will not throw a national news anchor behind bars for refusing to reveal a source.

RELATED Hugh Laurie Lands Veep Role: Could He Be the New Title Character?

PRUITT? SCREW IT | Without saying anything to her fiancé, Mac pulls Don and Jim aside and bumps up the deadline on Neal’s story to Wednesday. She doesn’t say why, but we know it’s because the source, Lily, will dump the documents into the public realm after that if NewsNight doesn’t air the piece.

Meanwhile, Will wants out of the party — but he can’t leave, because the whole reason he’s there is to meet future insufferable Atlantis Cable News owner Lucas Pruitt. Pruitt acknowledges that he made McAvoy & Co. come to the dinner as “an exercise of power” to show who’ll be boss once he plunks down the big bucks for the news division.

Mac is distracted, Charlie is incensed, Will tries his best, but you know the relationship is doomed when Skinner ends the meeting by yelling, “We’ve got a problem, you and me!” at his future employer. (Side note: Charlie on a rampage is delectable, and it pleases me to no end that we get two delicious servings of it during the hour. If HBO wants to greenlight a series that consists of nothing more than Sam Waterston railing about things for an hour at a time, I’d be down with that.)

THE END OF A (REALLY JUDGMENTAL) ERA | Outside the party, Maggie’s date Jack accidentally creates a very awkward situation when he talks about Jim and Hallie as a problem couple… to Jim and Hallie. Hallie is incensed that her boyfriend is discussing their relationship with Maggie at work; he manages to turn it around, though, to blaming her for Carnivore’s shaming of Will. As it turns out, she did point her editor in the right direction for the story, but I’m with her: There were thousands of reporters at that event and a whole bunch of them at the party — how did Will think he was going to get in and out without anyone noticing? On a related note: How did he get in and out without anyone noticing?

The interlude kicks off a lot of trouble for Harper and his lady. I’m going to shorthand it, because all of their angry silences and pointed looks are harshing my post-Thanksgiving stuffing buzz: He mocks her site’s preference for “personal” stories; she writes a post about dating a digital-hating, old-school journalist and covers Jim’s identity with the thinnest of veils; she shows up at ACN at 1 am and they have it out in a ridiculous argument that includes the phrase “I think you’re threatened by technology,” uttered without any irony whatsoever, and ends when she hands him her security pass to the building.

Meanwhile, Maggie and Jack shoot pool and Maggie stands up for Hallie — but Jack sees right through her. “You’re into Jim, and you don’t want to be a jealous cliché, so you defend Hallie for show,” he says, “And that’s a classy thing to do, but at some point, we’re going to have to discuss how that makes me feel to know that any man in your life is going to be the runner-up.” Wow. Ethics Boy serves up some Season 1 realness — but do we even care anymore if Maggie and Jim get together? I went from wanting that to loathing her to loathing him, and now it would take a grand — “canyon grand,” as Mags later says in relation to the gesture Jim will need to make to get Hallie back — turnaround for me to hop on the Sex and the City tour bus back to ‘shipping them. (I’m sure you’ve got thoughts on Maggie-Jim 2.0; make sure you drop ’em in the comments.) 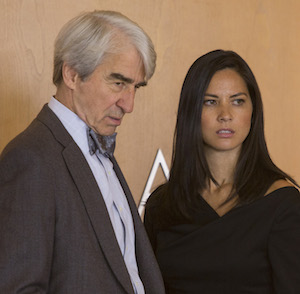 SLOAN SAVES THE DAY? | A desperate Charlie enlists Sloan’s help in a new plan: Make a list of rich people and see if they want to buy the news network. She scoffs at his approach until she remembers that one of his prospects, a rich woman played by Mad Men‘s Talia Balsam, is in the market for a media outlet. So they get a meeting and it looks like they’re saved — Charlie’s so sure of salvation, he even cusses out Pruitt as he’s signing the ACN ownership papers — but Sloan realizes too late that their one last hope actually is buying another media outlet… and her meeting with ACN was nothing more than leverage for that deal. Ah well, at least we get some nice Skinner-Sabbith teamwork out of it, which is a lovely evolution from “Don’t call me ‘girl,’ sir!”

MAC ON THE ATTACK | For MacKenzie, the week following the correspondents’ dinner involves spurring her team to vet the leaked documents and secretly traveling to Virginia to meet with Lily in an attempt to get her to push back her Wednesday deadline. Lily won’t, even when Mac tells her that the author of the planted article that got 38 people killed won’t leave the country until his family can come, too, and they need more time to get the youngest child a passport. So the News Night executive producer resorts to threats: “Dump the documents and I’ll quit my job, walk to the FBI and give them your name.”

All of the ACN staff’s hustling, though, is in vain: Reese calls Mac into his office to say that Pruitt won’t buy the news division if it runs the story, because the criminal fees the government is likely to leverage against the network will be financially devastating. All of their work “was for nothing?!” Mac asks, crestfallen. “Yeah,” her big boss replies, and he looks really sad about it, too. (I think I liked Reese better when I hated him, though I’ll watch Chris Messina do just about anything).

So Mac delivers the bad news to the staff, and she and Don send the documents and all of their research to one of his old Columbia journalism-school professors who works at the Associated Press, hoping she’ll break the story they can’t.

I NOW PRONOUNCE YOU FELON AND WIFE | For Will, the week following the dinner goes a bit differently. He shows up several times in legal settings; every time, he refuses to reveal Neal’s source. And the last time, that refusal lands him in jail. In the time between his sentencing and when he has to show up to be taken away, Mackenzie decides she wants to become his wife that day — her decision spurred, in part, by the fact that she told him she knows the source’s identity, too; but if they’re married, she can’t be compelled to testify against him, should it come to that.

So half of ACN spreads out over Manhattan to pull together a City Hall wedding in just a few hours. Sloan gets the cake at Magnolia (good choice, lady). Don and Jim nab rings at Tiffany. Maggie buys flowers at a bodega. Charlie wanders the halls of Juilliard until he’s put together an ensemble to perform “Ave Maria.” Will calls in a favor with a friendly priest, who officiates. It all comes together in splendid fashion, and the happy couple become man and wife while their staff friends watch.

Then, all that’s left is for Will to turn himself in. While a U.S. Marshall cuffs him, Mac kisses her new husband desperately… then watches as he’s walked of to begin his prison sentence. Two episodes left, folks: Is anyone truly worried that Will won’t be sprung from the pokey in that time?