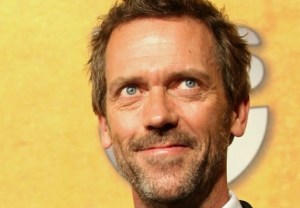 Hugh Laurie is making a house call to Season 4 of Veep.

The two-time Golden Globe winner (and six-time Emmy nominee) was spotted filming a scene today by Baltimore Media Blog, and HBO has confirmed to TVLine that he’ll indeed appear in the Julia Louis-Dreyfus comedy when it returns with fresh episodes next year.

The show’s reps declined to offer details on Laurie’s character — but a source indicates the stint will be for multiple episodes.

Louis-Dreyfus’ character, Selina Meyer, became the leader of the free world at the end of Season 3, when the never-seen POTUS suddenly resigned to care for his ailing wife. At the time, the hapless Meyer was in the midst of a quickly sinking bid for her party’s presidential nomination.

While Baltimore Media Blog speculated that Laurie might be playing Meyer’s campaign manager, that role was already occupied in the Season 3 finale by Anna Chlumsky’s ambitious Amy.

One role that wasn’t filled when we last saw Selina (and her very squeaky shoes) addressing the nation: A potential Biden to her Obama. And while Laurie’s British accent would have to be concealed (just like he did during his House days) in order for him to play her running-mate, a Louis-Drefyus/Laurie ticket would be potentially unstoppable — at least from a comedic standpoint.

Last month, AMC signed on as co-producer (along with BBC) of a six-to eight-episode event series adaptation of John le Carre’s The Night Manager, starring Laurie and Tom Hiddleston (Thor).

Are you digging the idea of Laurie on Veep? What role do you envision him playing? Hit the comments with your thoughts!