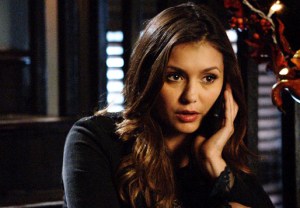 Sorry Salvatores, but as of Thursday’s Vampire Diaries, you no longer have the series’ most twisted family tree.

When TVLine spoke with Michael Trevino earlier this week, he promised mind-blowing revelations at the Thanksgiving table — and man, did this week’s episode deliver. For safety reasons, perhaps it’s best just to bullet the shockers.

* Jo is Kai’s twin sister.
* Luke and Liv are their younger siblings.
* Twins are meant to rule the Gemini coven, but because Kai didn’t have any powers, he and Jo weren’t eligible.
* In the Gemini coven, twins merge on their 22nd birthday; the weaker twin dies.
* On the night of May 9, 1994, Jo tricked Kai into thinking they were going to merge in order to trap him in his current prison.

As if all that wasn’t insane enough, Kai now has control over Jo’s powers — she did them in a knife in 1994 — and he totally ditched (a bloody) Bonnie at his coven’s old house! I ask again: Kai, why you gotta be so rude?

DELENA’S ‘TINY GLIMMER’ | Elena spent the first part of the hour stressing about how to reveal her vampirism to Liam — like anyone thought that would be a good idea — but as things escalated with Jo and the twins, it became increasingly obvious that he could never handle this particular brand of supernatural insanity. “As much as I like you, my life is complicated enough,” Elena told him, before compelling him to forget they ever dated. And whom did Elena turn to mere hours after cutting ties with Liam? Why, a certain brooding ex, of course! She admitted to being at a “crossroads” and to still having a “tiny glimmer of a feeling” for Damon, which is a hell of a lot more than she was willing to admit last week. #Progress 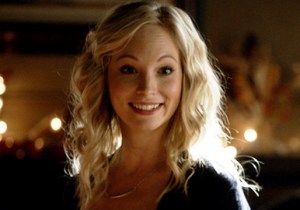 STELENA’S ‘LEFTOVERS’ | Stefan may not have been invited to Friendsgiving, but that didn’t stop him from showing up at Caroline’s dorm to beg for leftovers — with a side order of forgiveness. “When Damon was gone, I pushed you away,” he told her. “I knew you were the one person who would sit with me and let me cry, and I didn’t want to cry anymore, so I had to push you away the most.” While this didn’t immediately lead to the epic Steroline kiss we’ve all been waiting for, it was — like Damon and Elena — a step in the right direction. At least Caroline might finally be willing to drop her “I hate Stefan” act and go back to pining! Oh, how I’ve missed the pining.

‘I’M NOT GOING TO LET YOU DIE’ | OK, time to discuss potential couple No. 3: Liv and Tyler. I have to admit that before this episode, I wasn’t totally sold on the idea of them as a couple, but after their final scene together — as Tyler held her close and promised to find another way (“I’m not going to let you die”) — everything started to click. She’s a tortured soul with countless dead family members, and who’s more familiar with that story than Tyler?

All right, let’s hear your thoughts on, arguably, the show’s craziest episode all season: On a scale from 1 to 10, how blown is your mind? Are you bummed we didn’t get a Stefan-Caroline kiss? We’ve got two long, TVD-less weeks ahead of us, so drop your thoughts and theories below to help pass the time.