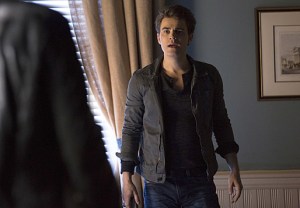 Elena and her pals celebrate “Friendsgiving” on Thursday (The CW, 8/7c), but this being The Vampire Diaries, it doesn’t take long for the happy holiday to — as Candice Accola put it during a recent set visit — descend into total “madness.”

And because Turkey Day is a time for sharing, star Michael Trevino said fans can expect “some revelations at the Thanksgiving table that will blow your minds,” in addition to plenty of romantic drama, all of which is detailed in full below:

CAROLINE VS. STEFAN | For starters, don’t expect to see Stefan and Caroline sharing a plate — or even a table. “She made it very clear at the end of the last episode that she hates him,” Accola said. “So when planning a Friendsgiving, according to her, he doesn’t necessarily fall into that category anymore.” You also shouldn’t expect to see Caroline dealing with those complicated emotions in, shall we say, a healthy manner. “Usually, she just likes to cover [her problems] up and pretend everything’s fine,” Accola says, “so we’ll probably see a little bit of that.”

TYLER’S TROUBLE | And Mr. Lockwood won’t need to ask for a second helping of awkwardness; he’ll be getting it whether he wants it or not. “You’ve got to imagine me,” Trevino explained, “Liv’s right here, and Caroline’s right there, so I’ve got the ex and this new girl I want to be dating. [Caroline and Tyler] have an exchange, but I think they’re at a common ground. There’s no drama there or animosity.”

ROAD TRIP | So, where’s Elena’s ex-boyfriend in all of this? While the girls, Tyler and Luke are busy passing plates, Damon, Stefan and Alaric head to Portland, where they find “a of s—t,” according to Ian Somerhalder. “It was a lot of fun to be back with the boys. I really dug it.”

KAI’S PAST REVEALED | Kai may be an evil sociopath, but you’ve got to admit, there’s something impossibly lovable about the li’l guy. Of course, I could be singing a different tune after this week’s history lesson. “We know why he’s in 1994, but [on Thursday], we see a little bit more of his violent past and exactly what it was that brought him to be locked there,” Chris Wood said, adding that you’ll see Kai’s “attempts to take over the coven and what went wrong.”

TVD fans, how are you hoping the characters sort out their various messes, both romantic and supernatural? Drop a comment with your thoughts below.