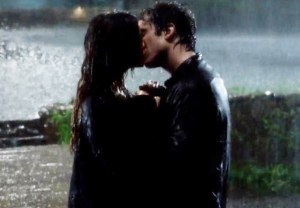 Approximately 40 minutes into last Thursday’s episode, The Vampire Diaries delivered a moment destined to go down as one of the most celebrated in the series’ history. Six days later, the ground is still wet.

RELATED Vampire Diaries Photos: What Are Damon and Elena Fighting About?

I’m referring, of course, to Damon and Elena’s steamy rain kiss — known on Twitter as simply #DelenaRainKiss — a gift which arrived in the form of a flashback from the show’s infamous lost summer.

So where did this fan-fueled moment come from? And what convinced executive producer Julie Plec to make it happen? The answers you seek lie just ahead in what I like to call “Delena Rain Kiss: An Oral History.” 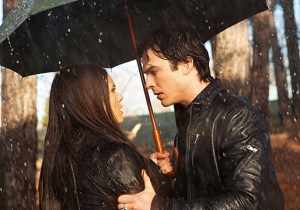 THE ORIGIN | “When Stefan got kidnapped in Season 1, Damon and Elena — who heretofore hadn’t worked together much — had to go and rescue Stefan … from Frederick; it was raining and they’re standing there talking to each other about rescuing Stefan,” Plec recalled with reporters on Tuesday. “That’s one of those canon moments where the people who started really connecting with Damon and Elena as a potential couple really always called out that moment as like, ‘Oh, God! One day, they’ll be in the rain and they’ll kiss.’ It started as a little Twitter thing. … We laugh at it sometimes, we laugh with it, we kind of love it. It’s been sort of a frustrating request to fulfill because it’s just so awful to shoot [from a technical standpoint].”

THE TURNING POINT | Plec continued: “Here we were in the season when Damon was trying to win Elena back, saying, ‘We loved each other’ and her saying, ‘Tell me a memory that mattered to you. I want to remember something.’ We were writing the story and we were thinking, ‘OK, what could that memory be?’ We’ve always wanted to say, ‘What was that summer that we skipped between Season 4 and 5 where they had the summer of their lives? What did they do? There’s got to be something awesome that they did.’ So we were like, ‘OK, is it a meteor shower? Are they out by a waterfall? We were just pitching all these ideas, and all of a sudden, someone — I don’t even know who it was, maybe it was me, maybe it was somebody else — said, ‘What if they kissed in the rain?’ And we all went, ‘Oh, God!'” 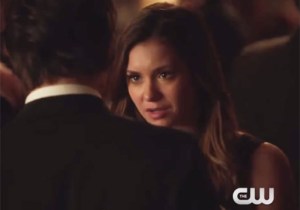 “The story was, ‘What was this memory that they shared?'” Plec explained. “It was going to be something beautiful and epic, so the rain was a way of us [honoring] this group of fans who spent five years begging for this one thing. … I think it’s because of The Notebook … oh, and Spider-Man. Basically, there’s something about people coming together in the rain that’s the ultimate expression of love in the minds of most audiences.”

THE JUSTIFICATION | “For every naysayer that’s like, ‘Fan service, blah, blah, blah’ … There’s fan service when you’re telling stories as though the fans think it’s a choose-your-own-adventure, and that’s not what we do,” Plec said. “Then there’s the fan service when you have a group of people who, for five years, have been begging for one little thing and you find the perfect way to give it to them. That’s called honoring your fans, and I believe that so strongly.”

TVD-ers, did you enjoy the long-awaited #DelenaRainKiss? Which couple should get caught under a storm cloud next? Drop a comment with your take on this historic moment below.