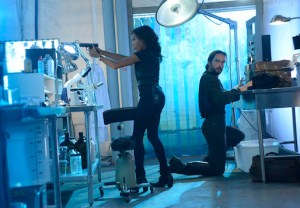 Katrina hops on Ichabod’s maybe-we-can-save-Henry crazy train in this week’s Sleepy Hollow, and this is after The Horseman Formerly Known as Jeremy impregnates her with a demon.

I understand that a mother’s love knows no bounds, but Katrina, honey? Loosen your corset, because there’s clearly not enough oxygen getting to your brain.

One upside of the situation: Abbie acts as a stand-in for the audience, so she gets to execute some epic eyerolls, incredulous head shakes and general “Have you lost your damn minds?” looks. It’s a good time, or, as good of a time as you can have when an evil hellbeast is knocking around your nether regions.

SOMETHING’S BUGGING ME | We open on the Cranes in their bed in olden times, and is it just me, or does a naked Ichabod somehow look more naked than the average man, merely because he’s not wearing his coat? They whisper about how he has to head out to New York in a few hours, then muse about what their children will be like. It’s one of the few not-fraught-with-death moments we’ve gotten to witness from the Cranes’ marriage… so naturally it ends with Ichabod horking up a demon spider and spitting it into Katrina’s open mouth.

Katrina wakes up screaming, and it’s the same as the last moment of the previous episode: She’s got some badness in her, courtesy of Henry, and it will continue to consume her throughout the hour.

ICHABOD FOR PRESIDENT | Meanwhile, Ichabod accompanies Abbie to the polling place while she exercises her hard-won right to vote. (He can’t pull a lever for anyone, because Hawley’s ID is good, but it’s not that good.) Ichabod rails against the low national voter turnout numbers and sneers that most people are more likely to weigh in on “American idolatry” (heh) than choose their leaders, then the Witnesses discuss how as a black woman with no property, Abbie would’ve been turned away from ye olde pollery places thrice over. (Side note: I also appreciated the quick line about how Abbie is paying Ichabod’s bills. I’d been wondering who was keeping the lights on at Corbin’s cabin.) Also cute: Ichabod being placated by Abbie placing her “I Voted” sticker on his lapel.

Their field lesson in American civic duty is cut short when some fellow cops mention that a Jane Doe with red hair and colonial garb has been brought into the emergency room. Yep, it’s Katrina, who managed to slip Henry and his goons when they came for her — her illness apparently is part of Moloch’s plan, and one on which Abraham was not briefed — but passed out at a nearby gas station. She’s got a fever of 105, an infection in her abdominal wall and gnarly black veins racing across her midsection like shoppers bursting into Wal-Mart on Black Friday morning.

DEATH CLUB 7 | Katrina’s magic won’t work on the mystery illness — wait, K-tree’s mojo is ineffective? You don’t say! — so Crane and Mills find her some clothes (thanks, some drunk goth girl with a 2-inch waist!) that Ichabod thinks are scandalous… though he can’t stop checking out his wife’s rack. (Heh.) And when Henry’s goons show up, the Cranes make for the archives while Abbie follows the bad guys back to a remote warehouse.

Abs skulks around the warehouse, snapping pics with her cell and brushing up against black-veined cadavers before escaping unnoticed. While she’s away, the Cranes have gathered some intel of their own: Based off an image Katrina remembers seeing in one of Henry’s goons’ notebooks, Ichabod deduces that the men are part of The Hellfire Club, a very old order of very bad people. (Franklin infiltrated their ranks; that’s how he got the key that sprang Abbie from Purgatory.) 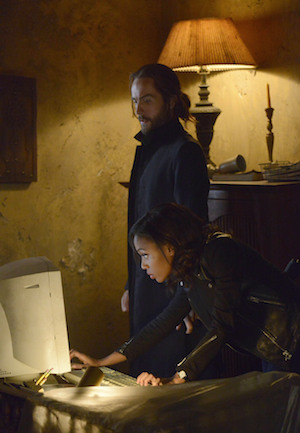 A VISIT FROM THE EVIL STORK | But wait, there’s more insanity. Further digging in the books reveals that Katrina’s not ill. “I’m pregnant,” she says, hand immediately going to her belly. When Abbie points out that Mr. and Mrs. Crane haven’t had much alone time in the past two centuries (so helpful, Mills!), Ichabod swiftly jumps to the conclusion that Katrina’s got a headless bun in her oven. Jealousy is not a good look on you, Ich. Eventually, everyone settles down and realizes what we already know: The poison Henry procured from Joe the Wendigo last episode has a fun side effect, namely inducing demon incubation in the poor soul who ingests the elixir.

Another visit from the goon squad drives Team WTF to the ruins of the church where Katrina left Henry as a baby. There, Katrina comes up with the idea that Henry will reverse this demon pregnancy if they can only tap into his humanity. “Can you hear yourselves?” Abbie asks the Cranes, but Ichabod is on board and all but defies his fellow Witness to go against him. “Shall we put it to a vote?” he crisply asks her, and damn.

RELATED Sleepy Hollow‘s Tom Mison Had to Act Opposite a Bird, and Here’s How it Went

So Ichabod, with Irving’s help, sets up a meeting with Henry at Tarrytown Psychiatric. They have a conversation that looks like it was framed by Tom Hooper, and it ends with Henry reaffirming his loyalty to Moloch. (Side note: I adore the way John Noble modulates his voice while playing Henry. It’s very subtle, yet very effective.)

As a last ditch, Ichabod grabs his son’s wrist — and gets a flash of a memory of a frightened child running through the forest. “That was you!” Ich breathes, and I immediately think that we’re going 12 Monkeys here and that the boy Ichabod and Abbie saved from the plague in Season 1 is going to turn out to be Jeremy somehow. But 1) that makes no sense, even for this bananapants show, and 2) Ichabod later makes it clear that the memory simply proves that Henry is still a lost child underneath all of the evil. Bottom line? Calm yourself, Roots.

Oh, and the demon in Katrina’s womb? It’s Moloch.

RED’S DEAD… BUT JUST A LITTLE | Back at the church, the witch’s belly goes from Sports Illustrated swimsuit model to 39 weeks and counting in the space of a minute. With time running out, Ichabod and Abbie’s hail Mary move involves liberating a tablet from the warehouse (and getting the Sleepy Hollow sheriff’s department to back them up), breaking it open and using the Franklin-created prism inside to shine a demon-busting aurora borealis on Katrina. (Side note: Will no one get this poor woman a mystical epidural?!)

The plan works — Moloch is banished (for now) — but Katrina stops breathing in the process. My first thought: Abbie, are you the worst first responder ever? GIVE HER CPR! Second thought: I’m glad Ichabod learned resuscitation techniques since Abbie’s near-drowning in the library. Third thought: Watching both Abbie and Ichabod simultaneously lose their stuff crushes me. Very nice work on Tom Mison’s part, especially.

Katrina eventually is revived, and the Cranes have a tearful reunion while Abbie sneaks outside to give them their privacy. But when Ich eventually comes to find his partner, they celebrate with a fist bump. Yeah… you guys might want to hold off on that until after you figure out what Henry is doing channeling lightning. My educated guess? He’s not looking for an eco-friendly way to get off the grid.

Now it’s your turn. Did you enjoy Ichabod’s frustration with dial-up? Are you impatient for Katrina to show us what she can really do? Did any part of you wish that, when Katrina was running through the woods during the cold open, she’d lift both arms in the air and then the show would cut to the opening credits? (Just me?) What do we think about Sheriff Reyes now that she’s Team WTF-friendly? And was anyone else surprised at how much they felt for Abraham as Katrina was being taken away? Sound off in the comments!