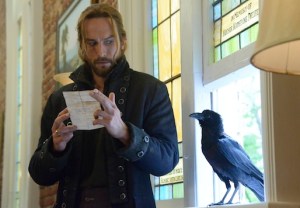 He’s referring to a scene in this Monday’s episode of the supernatural drama, in which Ichabod’s captive wife Katrina communicates with the Witnesses via a message-carrying raven.

Mison, who first mentioned the ordeal at this year’s San Diego Comic-Con, tells TVLine that shooting the sequence involved “trying to get a little bit of paper out of the crow’s mouth, and he bit my hand to buggery.”

The difficult guest star, apparently, did not try very hard to make friends on the series’ set.

“His name was Shaft. Shaft, the crow. They just let the camera roll and for about 15 or 20 minutes — a long time — it was just me going up, holding my hand out, trying to get the crow to drop the bit of paper in my hand. Instead, he’d put it next to him, peck my hand, and pick it up again,” Mison recalls, laughing.

“One of the best moments, the crow wrangler — what a job description — was just out of sight, hiding behind a bookshelf. I heard him at one point go, ‘Goddamn it, Shaft, you’re being an idiot!’ which is my quote of the season. It’s my favorite.”