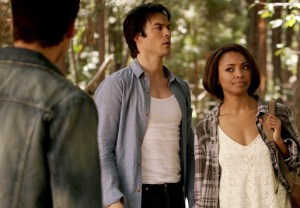 And then there were two.

Thursday’s Vampire Diaries booked a one-way ticket home for a lucky resident of Kai’s Personal Hell — but what’s a long-distance trip without a little turbulence?

Allow me to back up a bit: After attempting to shake off Kai — or, rather, turn him into a “douche kebab” via the aid of a pickaxe — Bonnie and Damon busted out the Ascendant and prepared for lift-off. Unfortunately, Kai’s like the herpes of TVD enemies, so he returned with a vengeance. A brief scuffle ensued, sending Bonnie to the ground and Damon, well, back home. (Sorry, Kai! Better luck never.)

The final moments of the episode treated viewers to a Damon-Stefan reunion so emotional it hit me right in my imaginary uterus. The hugging! The drinking! And were those tears coming out of Paul Wesley’s eyes? I think so!

And now, a random ‘shipper note: Did anyone else catch that flirty little exchange between Bonnie and Damon before he was sucked into the portal? “I’m sure there’s about a billion people you’d rather be here with,” he said, to which she breathily replied, “Not exactly.” It was an exact reversal of their banter at the end of the Season 5 finale, and a major treat for all those Bamon fanatics out there. (Are they out there?)

Regardless, Damon wasn’t the only one getting his flirt on this week…

BABY, I’M A-MAZE-D Elena — who still refers to Damon as a “serial killer,” despite Stefan reminding her how much she loved him — decided to give Liam another chance, allowing him to escort her to the Whitfield Homecoming Corn Maze (which really made me miss the Mystic Falls High decade dances, but that’s my issue). Their date was proceeding relatively smoothly, until Tyler swerved off the road and drove straight into the cornfield, leaving a trail of bloody co-eds in his wake. Liam’s heroics in the chaotic aftermath clearly struck a chord with Elena, inspiring a big goodnight kiss at the end of the evening, followed by a game-changing declaration: “You were a hero tonight, an absolutely jaw-dropping, out-of-this-world hero; that‘s my type,” she told him, apparently unaware that she was also describing her two fanged exes. (But I digress…) 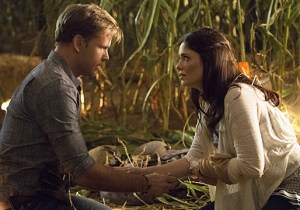 COMPEL ME NOT In other coupling news, Alaric — who, as Elena astutely pointed out, is “one hoodie and three missed haircuts from becoming Professor Shane” — went on his first official date with Jo, which was rudely interrupted by Tyler’s little accident. That’s when things got kind of crazy: At the hospital, when Alaric realized that Jo was falling for him, he went into panic mode, compelling her to ignore her feelings for him… only it didn’t work! Why didn’t it work, you ask? That, my friends, is a damn good question.

LIV AND [TYLER] LET [SOMEONE] DIE | All right, back to Tyler, who came this close to reverting to his wolf-y form this week. (Remember, kids: One kill and it’s were-city!) Fortunately, Liv took the proverbial bullet, ending the life of the guy Tyler hit with his truck so the death wouldn’t be on his hands. As for all the other people he hit in the corn maze, Tyler has Liam to thank for saving those lives. (Maybe he should follow Elena’s lead with a little thank-you sugar. No? Just me?) Either way, Liv’s sacrifice pretty much solidified #LivTyler as a couple, as Tyler delivered a big speech about she saved him, etc.

CASE OF THE EX | Racked by guilt over Ivy’s newfound vampirism — she had a freakin’ Etsy store, man! — the ever-predictable Stefan did exactly what we figured he would do: put Caroline on babysitting duty, correctly assuming she’d bend over backwards to help him at a moment’s notice. But his plan suffered a hiccup when Ivy grew restless, snapping Caroline’s neck and running into the night to feed her cravings; it hit a second hiccup when Ivy was vamp-napped by Tripp, as Caroline helplessly looked on in horror. At least one good thing came out of the whole situation, though: Caroline finally told Stefan off for dumping Ivy on her and trying to skip town. It hurt my Steroline-shipping when she told him she wanted him gone, but now that Damon’s back, methinks there’s hope for these two after all.

TVD fans, your take on this week’s episode? What’s up with Jo? How will Bonnie get back home? And do you approve of Elena and Liam? Drop a comment with your thoughts below.