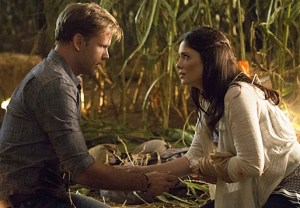 The Vampire Diaries‘ Alaric Saltzman doesn’t have the best track record with women — just grab a Ouija board and ask Jenna or Isobel — but Jodi Lyn O’Keefe (aka newcomer Jo) tells TVLine that the pouty professor’s luck is about to change.

“Maybe he’ll catch a break this time,” O’Keefe says of Alaric and Jo’s budding romance, which will take a major step in Thursday’s episode (The CW, 8/7c). Without giving too much away, let’s just say there’s a “surprise” which O’Keefe says left everyone at the table read “completely slack-jawed.”

Below, O’Keefe talks about prepping for the role of Alaric’s new boo, reveals which of her new co-stars are truly “nice gentlemen” and teases a big reveal about her character’s past.

TVLINE | There’s obviously more to Jo than meets the eye, but what were told about her when you first took the part?
They told me she’s really strong, she’s a doctor and that she’d be a potential love interest for Alaric. They also told me I was the only person on the show, as in non-magical. I said, ‘Guys, I feel like I was born for fangs. Let me do it!’

TVLINE | I’m really liking her with Alaric. What makes them right for each other?
She doesn’t take any crap, which is really good, and she knows what she wants. She’s her own woman, and I think that’s good for anyone. I think Alaric could use a little good luck after his history with women; things haven’t ended well for him.

TVLINE | Did you research the history of the show before you started, or did you go in blind?
Actually, I went back and watched every single episode.

TVLINE | The whole thing? Did you really?
I did, with my 13-year-old niece. She was on the east coast, and I was in L.A., and we started doing it together. We’d keep up with each other and see which episode we were each on. It always surprises me who the fans of this show are; my sister, who’s six years older than me, is a huge fan. She said to me, and I quote, “Finally, you’re on a show I like.” After 22 years, this is what she was most excited about. 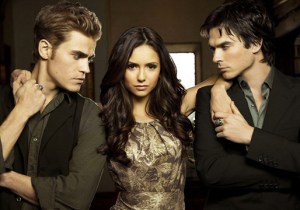 TVLINE | Do you have a favorite season or story line from the show so far?
Honestly, I’m still really loving the main love triangle. For me, it all happened in fast forward, but it was so cool to watch that romantic battle with Elena, Stefan and Damon. That’s been the best part for me so far.

TVLINE | It’s certainly been the one constant throughout the series.
On Twitter, people always ask me, “Are you in the same room as Ian Somerhalder? Are you with Matt Davis right now?” The girls on Twitter love those boys, and what’s not to love? They’re all such nice gentlemen on top of everything else.

TVLINE | No one is introduced on this show by coincidence. Might Jo be connected to one of the larger story lines?
Well, we’re all here for a reason, including Jo. She’s shown up for a reason, so we’ll just have to wait and see.

TVLINE | We know she opens up to Alaric about her “tragic” past next week. Anything you can elaborate on?
We’ll just say she has issues with her family.

TVD fans, any theories about what Jo is really all about? Browse photos from upcoming episodes, then drop a comment below.