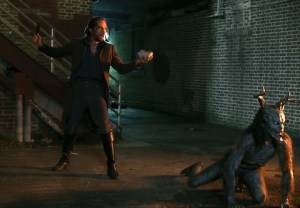 Ichabod has a breakthrough in this week’s Sleepy Hollow, and it just may mean the end of all of us.

No, I’m not talking about his dabbling in yoga nor his discovery of online gaming — though we will discuss those in detail in a moment. I mean his realization that he loves Henry, despite all of the malarkey the Cranes’ bent-on-evil son has caused.

When my dad decided not to go nuclear the time I somehow hooked the wheel well of my Honda onto the bumper of his Monte Carlo? That was love. When Ichabod weakens, however imperceptibly, his resolve to take out the Horseman of War… just because he’s his kid? That’s the kind of foolishness worthy of many Abbie Mills eye-rolls.

I’m getting so worked up, I might need a little cabin yoga to calm myself down. While I’m taking deep, cleansing breaths, let’s review what happens in “And the Abyss Gazes Back.”

THE LEFTENANT IN ME HONORS THE LEFTENANT IN YOU | The hour opens with the aforementioned yoga session, during which both Crane executes a not-bad-for-a-newbie handstand. (Abbie’s inversion looks great, too, but you get the feeling she’s done this before.) She explains that they’re gearing up for the battle against evil; apparently, evil is undone by tight abs and buns. By the way, Ichabod is absolutely scandalized by Abbie’s mention of the b-word; his preferred slang for tush is “double jug.” “For the record,” she informs him correctly, “‘double jug’ is much weirder than ‘buns.'” Also: A moment, please, for the glistening, yogawear-sporting Witnesses. Did I just wander into a Bikram studio, or is it hot in here?

Omchabod decides he wants no part of the practice (that’s smart, Crane; get out before the Lululemon addiction takes hold), and for all of his blustering and fussiness, Abbie sees that he’s still really torn up about Katrina’s duplicity. So Mills lets him choose their next stress-busting activity, and they wind up at the bar. (Side note: The show is really getting its money’s worth outta that set this season, eh?) (Another side note: How are we feeling about the unbinding of Ichabod’s hair as of late? Sometimes I get a Sully vibe, and I’m not sure how I feel about that. Anyone else?)

Abs and Ich have only taken a few swallows of their beers before a fight breaks out among the establishment’s patrons, and Lt. Abbie is all, “CAN’T I EVEN HAVE ONE MINUTE WITHOUT HAVING TO REGULATE?” But she intervenes and realizes that the guy causing the most problems is Sheriff Corbin’s son, Joe.

SAY IT AIN’T SO, JOE | Joe is a) recently honorably discharged from the Marines, who had him stationed in Afghanistan; b) a dead ringer for a young Clancy Brown; c) really not Abbie’s biggest fan. There’s a lot of jealousy there; in short, Joe feels like his dad loved Abbie more than he loved his own child. Or, in his own words, “You’re some charity case my dad took pity on, and you got him killed.” Ouch.

Speaking of getting killed: Abbie fields a call on the police radio that there’s a problem at a remote area called Pioneer Point. When she and Crane arrive, a giant beast-type thing takes a run at them. Then, they discover huge, animal-like footprints, two eviscerated corpses and an out-of-it Joe who rambles things like, “My dad knew” and “It’s gonna kill us all.”

MODERN, WOOD-DWELLING MONSTERS | Let’s save a lot of time here and just jump to the conclusion that Ichabod suspects right from that very moment: Joe is the beast that killed the two men. He’s a wendigo, a cannibalistic monster known in Shawnee legend and activated by the scent of human blood. Further, the sheriff left his son an “inheritance” that he needed kept safe: When the Witnesses track Joe to where he’s digging it up near Pioneer Point, Ichabod accidentally cuts himself, triggering young Corbin to transform. There’s a chase, and Ich nearly gets eaten, but Abbie’s tranquilizer-gun skils allow them to knock the wendigo down and chain him up in the Masonic cell.

Jenny feeds Joe some organs from a nearby med school’s cadaver lab, and he reverts to human form. (Side note: Who put the pants on him, do you think?) Corbin’s son relates that he received a letter dusted in white powder while stationed in Afghanistan. The missive said he was cursed — which seemed like a joke before he wendigoed-out and destroyed his platoon —  but he could reverse it by trading his dad’s artifact.

That powder? The Pied Piper’s ground-up flute. The letter’s sender? One Henry “Don’t Call Me Jeremy” Parrish, Esq. H.O.W. And the artifact in question is a bottle of a very lethal poison from China.

BESTING THE BEAST | Enter Hawley, who’s brought in because he knows some Shawnee who might be able to help. But they kinda hate him. So Ichabod accompanies him to what looks like SAMCRO: Native American edition, and they succeed in securing a cure for what ails Joe. But they’re too late: The men return to the cell to find that Henry has just walked right in (seriously, Witnesses?) with some armed goons and convinced Joe to come with him.

Henry, naturally, welches on his end of the deal. So everyone goes on a Wendi-Joe hunt, during which Ichabod and Abbie use themselves as bait. It’s well-established that Mills and Crane are friends and partners and adore each other, so why am I so touched at both Tom Mison’s reading of “Of course I’m coming with you!” and the gentle way she puts her hand on his chest before they run off to lure Joe out of hiding?

In the end, they manage to corner Joe and de-Wendigo him, though it’s a close thing and for a moment, Abbie thinks she may have to kill the offspring of her beloved mentor. Later, she agrees to write him a recommendation letter for Quantico. Not so sure how much weight a rec from someone who blew off their program is gonna carry, Joe, but more power to you.

Meanwhile, Ichabod raises his blood pressure with a first-person shooter game — I’m going to work “scurvy louse” into my insult repertoire ASAP — then informs Abbie that after chatting with Joe, “Now I must fight for my son.” 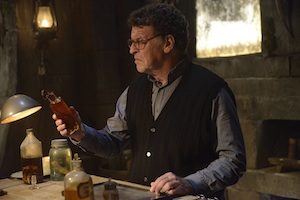 That’s nice and all, Ich, but said son is at this very moment distilling the nasty Chinese poison into a magical (and, I’m assuming, rather lethal) spider that sidesteps its way into Katrina’s bed and crawls into her open mouth. Ick.

CRAZY IS AS CRAZY DOES | Meanwhile, over at Tarrytown Psychiatric, Henry has informed Irving that the drunk driver who put Macey in a wheelchair also is a patient (and another client of Henry’s). And if Irving wants to get out of signing away his soul, all he has to do is kill the man. It helps that the drunk driver is a jackass who’s not really all that sorry for ruining the Irving family’s life. Frank comes close, but has a flashback to that weird, apocalyptic vision he had in the library, and he stops himself from ending the man. Later, Irving calls Abbie and tells her everything. She reminds him that he’s a good man. “Even God thought the devil was beautiful before he fell,” Irving intones, asking Abbie not to let him down, then hanging up. 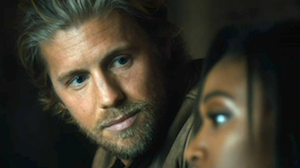 Now it’s your turn. What was more amusing? Abbie’s mention of “hamburger double jugs” or Ichabod’s “arachnid fellow” reference during the superheroes discussion? Are you with me in my worry that Ichabod’s desire to treat Henry with love will be his undoing? For being this cool-guy, bounty-hunter type, isn’t Hawley rather bad at hiding his smittenness? (Photographic evidence at right.) Were you happy to have Clancy Brown back in the Hollow? Sound off in the comments!