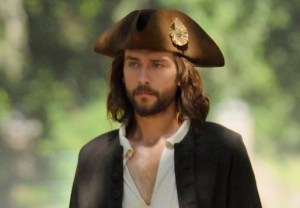 Betsy Ross wasn’t the only 18th-century lady who lusted after Ich’s bod.

He explains that the Crane and Wells families arranged an engagement between their children — one that Ichabod broke off upon coming to America.

“He thought that he’d left her back in England, and she comes thinking that she’s going to bring him back home to Papa and restore their relationship and get him out of this silly [change] of countries that he’s done,” Goffman adds, laughing. 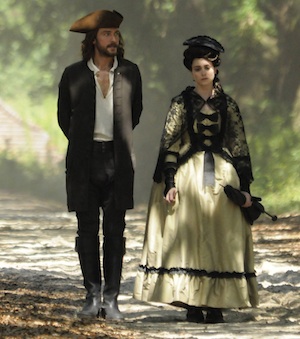 Mary’s romantic plight goes from tragicomic to traumatic when she appears in present-day Sleepy Hollow as an undead, bent-on-destruction Weeping Lady… a situation that may prove easier for Ichabod to handle than understanding current courtship rituals.

“The 18th century was more formal in terms of dating, and modern women are a little bit more open,” says Goffman, previewing another scene from the episode. When a woman shows a healthy bit of interest in Ichabod, he counters that he’s married, and… “Abbie walks into the scene,” he adds. The woman “thinks that Abbie’s his wife and calls Abbie ‘Mrs. Crane.'”

“We’re not screwing with the fans. We’re really not,” executive producer Len Wiseman promises, using words like “charming,” “sweet” and “respectful” to describe the Abbie-Ichabod vibe and acknowledging that “It’s a fine line” between where the Witnesses are and where the Ichabbie enthusiasts would like them to be.

“I do think that they adore each other,” Wiseman says. “And that’s a tricky one.”

But as long as Katrina is around, Goffman says, the Cranes’ wedding vows will be a “barrier” between the Witnesses “that allows them to be really close without ever having to worry about crossing that line.”

He adds: “It’s something that neither of them would do.”