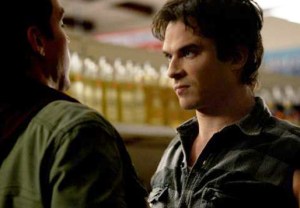 Is it just me, or is hell getting awfully crowded?

Thursday’s Vampire Diaries introduced a mysterious new “friend” for Damon and Bonnie to play with: a pork rind-loving chap named Kai, who flat-out admitted to wanting Damon dead. Actually, he did more than admit it. Were it not for Bonnie regaining her powers and engulfing the troublemaker in flames, Damon could have ended up a twice-dead potato.

But because nothing is ever what it seems — especially in ’90s hell — Kai claimed this was all part of his master plan. “Your magic is the key to getting the hell out of here,” Kai explained to Bonnie. He knew that putting Damon’s life in danger would inspire Bonnie’s magic to return, though he admitted that their bickering had him worried: “I guess that’s just how you two show your love.”

RELATED Vampire Diaries‘ Michael Malarkey on Enzo-Caroline Romance: ‘I’m All for It’

(So much to think about: Is this “Kai” character good or bad? Could Bonnie and Damon really have secret feelings for each other? And how does Kai keep such a remarkable figure on a diet of, I assume, exclusively pork rinds?)

Meanwhile, in the land of the living… 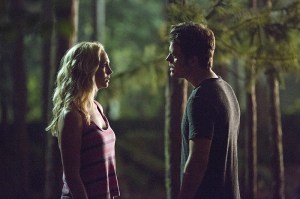 STEFAN SALVATORE: VAMPIRE HUNTER? | The prodigal vampire made his triumphant return to Whitmore this week, partially to catch up with old flames, but mostly to get even with Enzo for killing his new girlfriend… and oh, how even he got. Even after Enzo saved him from Matt’s buddy Jay — who, in addition to being a huge douche, is apparently also a vampire hunter — Stefan wasn’t quite satisfied. It wasn’t until he fired two stakes into Enzo’s back, then handed his limp little body over to Tripp, that he finally felt some retribution. (Why do I get the feeling he’ll regret that next week?)

STAY WITH ME | Speaking of Enzo, his relationship with Caroline continued to move in a strange, unsettling direction this week as they bonded over breakfast. “Ironically, he’s recently become one of the more stable people in my life,” she told Elena, though Caroline probably shouldn’t expect her bestie’s blessing anytime soon. (As Elena put it, Enzo’s “not new best friend replacement material.”) Of course, Enzo didn’t remain atop Caroline’s list for long; after finding out what Enzo did to Ivy, Caroline delivered a full-on “stay for me” speech to Stefan, and Elena was happy to give her BFF a shoulder to cry on when Stefan walked away in silence. (Note: I’m still in support of a Stefan-Caroline romance, but seeing her cry over him two weeks in a row is killing me. There’s got to be a less complicated boyfriend out there for her. Somewhere.) 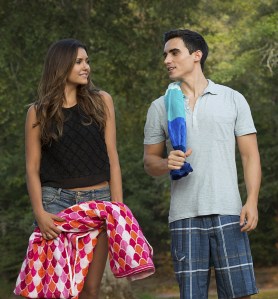 THAT GILBERT CHARM | And then there’s Elena, whose love life wasn’t any less complicated than Caroline’s. In addition to walking down memory lane with Stefan — it really has been two years, hasn’t it? — she also attempted to set Caroline up with her med-school buddy Liam, a plan that completely blew up in her face when Liam ended up kissing her instead. (Despite all that drama, I will say it was nice to see Elena happy for a change, even if she had to completely forget her life with Damon just to crack a smile.)

IT’S ALL COMING BACK | Jeremy’s new shady friend didn’t come any closer to finding out who her father is this week, but can you blame her for getting distracted? If your two options were “look for your family” or “hang out with a bathing suit-clad Jeremy,” which would you choose? Then again, Sarah’s got quite a bit on her mind now that a trip to Mystic Falls has undone Elena’s compulsion, thus reminding her that Elena tried to kill her. (Jeremy’s lucky he’s pretty, because sometimes I think dating him is more trouble than it’s worth.)

#LIVTYLER | Speaking of strange relationships budding… Liv and Tyler? Oh yes, it’s happening. Naturally, Luke was the first to notice, calling his sister out for doing “that thing where you’re a bitch because you like somebody.” And it didn’t take long for Liv to admit her feelings to Tyler: “It’s easier for me if you’re an aggressive, unlikable dick, so I don’t have to worry about falling for you.” (Yeah, Liv, I guess it would be weird having two aggressive, unlikable people in a relationship. Zing.)

OK, let’s talk: Do we like Liv and Tyler together? Are we mad at Stefan for stabbing/shooting Enzo in the back? And what do we make of this Kai fella? Browse photos from next week’s episode below, then drop a comment with your thoughts.