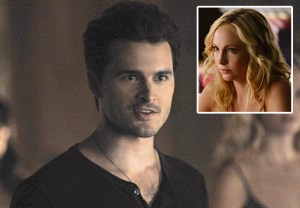 Enzo makes his triumphant return to The Vampire Diaries this Thursday (The CW, 8/7c) with one goal in mind: track down his old pal Damon. But does that mean he won’t also have time for a certain golden-haired vamp with an affinity for British accents?

Yeah, right. Have you seen this show before?

“All romantic connotations aside, he considers [Caroline] one of his road dogs,” Michael Malarkey tells TVLine of Enzo’s relationship with Ms. Forbes. “She ends up getting swept up alongside some of the missions he goes on and, for better or worse, they pair up. I also think he appreciates her sense of tenacity and loyalty. Also, she just has this elegance which is also attractive to him.”

And should that relationship turn romantic, you can count Malarkey in.

“I’m all for it,” he says. “Candice [Accola] is just a joy to work with. She’s got a real effervescent energy, and I’d love to have more scenes with her, romantic or otherwise.”

Second to Caroline, Malarkey says Enzo will be bro-ing out with Matt and Stefan, adding that “there’s a real edge” to Enzo’s interactions with the remaining Salvatore.

And you might want to keep your ear open, because if Malarkey has his way, you might be hearing one of his tunes — yes, he sings — on the show in the near future.

“I’ve been talking to Chris Mollere, our music guy, about sending him my stuff,” Malarkey says. “He seems to dig it, so maybe that could happen. That’d be awesome. I was a musician before I became an actor. Music has always been my main hobby and a huge part of my identity.”

(Who knows, maybe Enzo and Caroline will be making sweet music together before you know it.)

TVD fans, your thoughts on a possible — and seemingly inevitable — Caroline-Enzo pairing? Drop ’em in the comments section below.